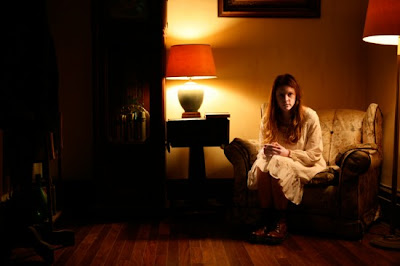 Cotton Marcus comes from a long line of preachers and developed a gift for ministry as a child. His father has given him an ancient book of demons that is necessary for their work of exorcising the evil out of the afflicted. Cotton doesn't really believe in the process, in fact he often stages the rite for the money.

Shot like a documentary by Daniel Stamm it's more like a mockumentary. The script by Huck Botko and Andrew Gurland has a camera crew following Cotton (Patrick Fabian) a cynical preacher, clean cut family man, who has offered to debunk the practice of exorcism. He randomly selects a letter from the many he receives to exorcise demons from a family's loved one. One particular letter claims animal mutilations on a small farm in Louisiana. The camera crew head out down the back roads of this small town to the home of Louis Sweetzer (Louis Herthum). On the way there they meet Caleb Sweetzer (Caleb Landy Jones) who tells them to go back to where they came from before pelting their car with rocks. At the house they are introduced to Nell (Ashley Bell), a sweet innocent young woman whose mother had passed away a couple of years ago, and her strict father now keeps her home. She tells them that she wakes up with her clothes all bloody and finds out later that some of the farm animals have been slaughtered. Nell doesn't remember anything about this. Cotton tries to talk her father out of doing a ceremony on his daughter's behalf believing that her sheltered life, her religiously zealot father and the grief from her mom's passing may be what's wrong with Nell. Cotton then shows the camera crew how he sets up the exorcism by stringing the bed and mirror to shake and putting powder in his cross to look like it's smoking. He tells Louis that Nell is probably being possessed by a very strong demon and for the benefit of the camera crew plays up his ritual. After collecting the money, Cotton and the crew take off. But something doesn't sit right with Cotton, so despite the misgivings of the crew, he decides they should go back.

Unlike Blair Witch, the Last Exorcism doesn't suffer from the shaky camera syndrome. It captures small bits of scenes like moving a binocular past something quickly, coming back, trying to adjust your eyes to what you are seeing. There's enough creepy scenes especially when Nell contorts she body into weird positions or confronting a barn cat that makes the collective audience gasp. This is not the usual slice and dice with graphic carnage. It wisely focuses on the creep value of staying in an old farmhouse with crazy girl with a knife. Everything was working nicely until the final climax of the movie which gets all Rosemary Baby but not. The original 1973 Exorcist movie has nothing to do with this besides a head turning and the devil being in a young woman. Scary for it's time, it's almost cheesy now. Exorcism is a favorite concept for movies so no doubt this will be the last.
(Review by Reesa)

Posted by Dallas Movie Screenings at 12:13 AM

Email ThisBlogThis!Share to TwitterShare to FacebookShare to Pinterest
Labels: The Last Exorcism Review