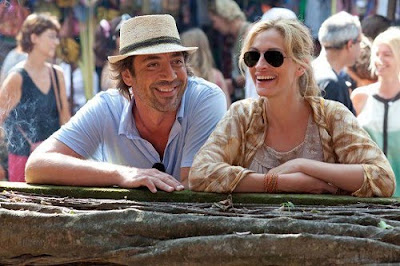 Liz is a successful writer who is feeling like something is missing from her seemly perfect life and marriage. One night she drops to her knees and prays for an answer then tells her husband she doesn't want to be married anymore.

Once on a trip to Bali, Elizabeth Gilbert (Julia Roberts) met a shaman who foretold that she will lose all her money, it will come back and she will return to Bali to teach him English and he will teach her everything he knows. After dealing with the guilt of her divorce with Stephen (Billy Crudup) she hits another roadblock with the rebound boy friend David (James Franco). She decides to travel around the world. She tells her best friend and editor Delia (Viola Davis) that she's always had a man in her life and she needs to find out how to be herself. She had always wanted to go to Italy and learn Italian. She rents a funky apartment, makes new friends and finds how to open herself to new experiences . This includes indulging in the wanton enjoyment of Italian culinary delights. Going to India afterwards was a big culture shock living at the ashram of the guru she met through David. Liz butts heads with Richard from Texas (Richard Jenkins) who calls her Groceries for her big appetite. He badgers and pushes her in a friendly and annoying manner as she tries to find peace with her failed marriage and love affair. In Bali she returns to the shaman and is almost run into on her bike by Brazilian businessman Felipe (Javier Bardem). He's also divorced and not quite ready to love again.

Based on the book of the same name by the real Elizabeth Gilbert, the screenplay by Ryan Murphy and Jennifer Salt took out most of the angst that burdened the novel. Gilbert's novel spends chapters of her journey of self discovery which many faithful readers apparently related, but personally I found it tiresome and self indulgent. Ryan Murphy who is the mastermind behind Glee and also directed the quirky Running With Scissors gives this film a lighter touch and fills the screen with the picturesque locations. The camera particularly loves Julia Roberts who is one of those rare actresses that look beautiful, vulnerable and radiant all at the same time. She is fashionably at ease in cool flowing sensible traveling clothes and rivals the excess of the Sex and the City women. Javier Bardem is charming and wonderful eye candy. It's just hard to relate to Liz and her problems. She's a privileged financially stable woman who can afford to travel and explore these exotic locals to find her inner peace. While the rest of us stay home wondering how to pay rent, feed our kids, and get a good nights sleep. It's a nice escape for a couple of hours, but the dishes are still in the sink when you get home.
(Review by Reesa)