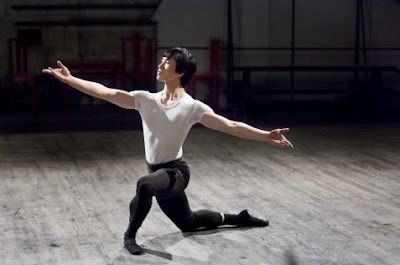 In an impoverished village in the People's Republic of China 11 year old Li Cunxin was selected by Madame Mao's cultural advisors to attend the Beijing Dance Academy. After years of training enduring 16 hour days, he became of of the first students to go the United States.

At first Li has difficulty with strength and is constantly badgered by one of his teachers. He struggles to endure for the honor of his family and country. His favorite teacher is taken away for his cultural differences when he disagrees with Madame Mao's insistence that the performances have more guns and revolution. He secretly leaves a VCR tape of a Baryshnikov performance that inspires Li to find the heart of his dancing. On a visit to China, Ben Stevenson, director of the Houston Ballet offers Li a 3 month stay as a US exchange student to study at their school. Impressed with his talent, Li quickly attracts attention and accolades for his performances. Stevenson requests an extension to stay longer but the Chinese government refuses. Li marries his American girlfriend and with the help of lawyer, Charles Foster tries to report his marriage to the Chinese Consulate General in Houston. Li was told that the Chinese government respects international marriages. But he is detained and held for 21 hours before media pressure and high level negotiations intervene. Li would be allowed to stay in the US, but he would never be allowed to return to China. This causes him great distress wondering how his defection is affecting his family and after a few years his marriage fails. Five years later, as a sign of goodwill, the Chinese government allows his parents to attend one of his performances in America. Later, Li is granted permission to return to his village to see his family and his old teacher and perform with his new wife in an impromptu outdoor ballet.

Based on the Li's autobiography, director Bruce Beresford and writer Jan Sardi bring to life an inspiring tale of the exile's life from poverty in China to fame and fortune in the west. Li selected Chi Cao, a principal dancer with the Birmingham Royal Ballet to play him. Chi's parents were once Li's teachers. Joan Chen plays Li's mother whose pride at seeing his performance at the end of the film will bring tears to the eyes. Bruce Greenwood does a remarkable job of Ben Stevenson who guides Li through his first days in US. Indoctrinated from childhood on the evils of the western world, Li is cautious. When Stevenson buys him clothes at the mall spending more money than his parents make in a whole year, Li feels guilty for taking it. Kyle MacLachlan has a small but affective role as Charles Foster the lawyer who intervenes at the Consulate standoff. This feel good film has the potential of being the Slumdog movie of the year.
(Review by Reesa)