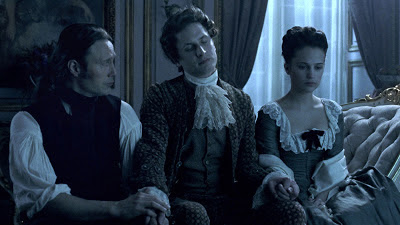 Caroline Mathilde (Alicia Vikander) is from the Royal British family and at 15 years of age the prospective bride of Christian the VII, King of Denmark (Mikkel Boe FÃ¸lsgaard). Whatever hopes of Caroline having a happy ever after is quickly dashed when she realizes the King is a bit unstable probably mentally ill. The restrictive political and personal environment censor's the Queen's library she had brought from England. Having given the kingdom an heir, Queen Caroline resolves herself to her fate. That is until she meets the dashing royal physician Johann Friedrich Struensee (Mads Mikkelsen). Struensee was German country doctor. He was recruited by a Danish noble who needed to get some favors from the Royal Council. The Council basically rules the country while padding their pockets. The King is easily bullied or cowed into doing as the Council dictates. The doctor quickly develops a friendship with the young man. Their relationship becomes a big brother/father thing. Soon the doctor's influence is scaring the high ranking members of the royal court. At the same time the Queen is attracted to Struensee's interest in literature and ideas of the Enlightenment.

Soon the Queen and Struensee begin to take power from the pliable King. Laws enacting major social reforms to improve the lives of the common people begin to threaten the Queen Dowager who wants to put her own offspring on the throne. A conspiracy brews under the heady days of the king, queen and doctor who are feeling they are making a difference. Under Struensee's coaching and encouragement the king begins to offer his own opinions and suggestions at the royal council meetings. The doctor also gives himself the power to sign in place of the king and abolishes the royal council. After passing all these progressive programs like inoculations for smallpox and homes for unwanted children the government is becoming broke. Struensee's answer is to start collecting from the noble class. Then like now, the rich will do anything to protect their wealth. The doctor and queen's affair is revealed.

The queen leaves a letter while in exile for her children by the king and the doctor. She tells them the real story of their fathers and what they tried to do for their country. History proves the King Fredrick finished his father's job and brought Denmark out of the middle ages. Most people would never know any of this unless you are an history buff if it wasn't for movies like this love affair that changed the world. Beautifully filmed, costumes, sets, and decent subtitles, and maybe a little to long. Lust and love in the rotten state of Denmark.
(Review by reesa)

Email ThisBlogThis!Share to TwitterShare to FacebookShare to Pinterest
Labels: A Royal Affair review