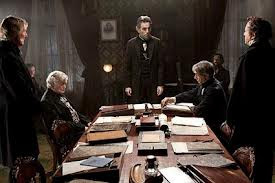 Steven Spielberg's epic on our country's 16th president is a timely and important film opening right after the general election. The screenplay by Pulitzer Prize winner playwright Tony Kushner (Angels in America) was based on Doris Dearns Goodwin's biography of Lincoln Team of Rivals:The Political Genius of Abraham Lincoln. Kushner's original story was over 500 pages and took 6 years to complete. Speilberg chose only Lincoln's final four months for the focus of the film. The critical passage of the 13th Amendment to abolish slavery was the turning point for the Civil War that ravaged the country for the past four years. It also shows that the ways of our system of government hasn't changed all that much in it's political machinations.

Daniel Day Lewis will probably earn an award nomination for his complete transformation into the homespun story telling, warm hearted and accessible president. He takes time to talk to the troops, listen to their stories, and treat all people no matter what color with respect. Lincoln struggles to keep his political life and his personal life with his wife Mary Todd Lincoln (Sally Field) and their youngest son Tad separate from the demands of his office. Mary is at times slightly unhinged at the thought of loss of one their sons when their middle son Robert (Joseph Gordon-Levitt) comes home from school wanting to join the army. Gloria Ruben plays Mary Todd's personal companion Elizabeth Keckley who is treated like an equal in the Lincoln household lends a quiet strength and a reminder that being a woman of color in that time period is a hard road to tow.

If you slept through Social Studies in school, the important movers and shakers during the 1860's will probably be lost on you. However, the maneuverings , the long winded speeches, the general pontificating by the Senate as they battle the pro's and con's of passing this important piece of history is just about what you would expect from the House of Representatives. The two party system has the Republican's for the Amendment, while the Democrats dig their feet in to keep the status quo. Lincoln recruits James Spader, John Hawkes and Tim Blake Nelson as lobbyists to try and sway some of opinions of the other side by offering money and positions for votes. They also try to stall the Confederate peace delegation.

The costumes and set decoration are outstanding. The cramped cabinet rooms where the powers that be mash over policy and plotting, the dark over upholstered bedrooms of the White House, the mountains of bodies that litter the battlefields show the attention to detail that creates the complete environment for the times. The script is not all dour and formal, Kushner makes the historical figures humorous and completely human.

The multiple characters may at times feel confusing with Tommy Lee Jones as an abolitionist Republican Congressional leader Thaddeus Stevens as a stand out here. David Strathaim plays Secretary of State William Seward, Bruce McGill as Security of War Edwin Stanton, Jared Harris as Lt. General Ulysses S. Grant, Jackie Earle Haley as the Confederate States Vice President Alexander H. Stephens, Lee Pace as Fernando Wood the Copperhead Democratic Congressman who fervently pushes for the end of the Amendment, and Hal Holbrook as Francis Preston Blair who tries to make peace with the North and the South.

There's lots of dense dialogue regarding those who want to change the world and those who fear what this change will bring. Just as it is today there are factions fighting for their own agenda. The movie does beg the question of what would our world be like today if the Confederates States seceded from the union and slavery continued. We need this reminder of what a great president can accomplish.
(Review by reesa)