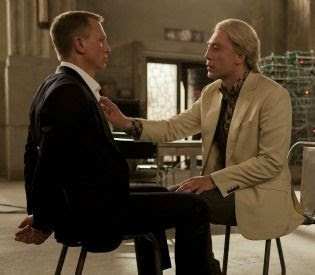 After fifty years, the Bond franchise needed to be shaken and not stirred. With director Sam Mendes at the helm with a script by Neal Purvis, Robert Wade and John Logan, the twenty third installment of Ian Fleming's cold war spy character gets a modern times reboot. Daniel Craig is back making Bond into one of the better interpretations of the no nonsense field operator. The world is rapidly changing and the British government doesn't think the need for old school spies are needed. Bond begs to differ.

The film opens with the signature action sequences that involve motorbike chase across the Istanbul bazaar marketplace rooftops to chases on a train roof, and the creative use of a big rig shovel on a passenger car as Bond lightly steps down adjusting his cuff links. All this before the beginning titles. Everyone believes Bond is dead after M (Judith Dench in her seventh appearance as the head of M16) orders his partner (Naomi Harris) to shoot while he was engaged in a fight. Someone stole the list of M16 operatives and it puts the agency in hot water with the new chairman of the Intelligence and Security Committee Gareth Mallory (Ralph Fiennes). When the headquarters of M16 is blown up in front of M, someone hacks into her computer. Bond hearing of the terrorism returns after his forced retirement.

It becomes apparent that the culprit is someone with inside knowledge of their department. Bond has to be cleared for active duty, but the months he has spend recuperating has made him woefully out of shape. M clears him anyways. The clues takes him to exotic locations, beautiful women, and amazingly shot action fighting. The new Q (Ben Whishaw) is a young nerdy type who is of course a genius. He only gives Bond a PPK 9mm that has a dermal sensor so only he can use it and a small radio transmitter when he needs help. None of the big gadget Q toys that marked the earlier Bond films. In fact, Bond's Aston Martin turns up later in the film and there's an offhand nod to the ejector seat.

The new villain is the wonderfully nuanced white haired Javier Bardem as Silva. The adversary is introduced by Silva walking slowing into a long room. You can only see a small dot as he steps forward telling a story of trapping rats and how only two rats survive. This is important later on. His Spanish accent is menacing in a conversational low keyed manner with homo erotic overtones to a bounded Bond. Although Silva hates the old world spy game, he's decided to take control of his destiny and create his own espionage jobs. He incorporates all the new world hi-tech gizmos to accomplish cyber terrorism all for his own profit and amusement. Despite Bond's efforts to contain Silva, somehow he manages to be always one step ahead.

Meanwhile M has to face a hearing with the Prime Minister on the number of agents that were killed from the stolen list of active field operatives. The PM insists that technology is far better than using live people. Even Mallory warned her that she may be asked to hand in her voluntary retirement papers. M refuses to step down until this last job is accomplished.

What makes this Bond so satisfying and probably the most talked about element is the origin story that takes us to Bond's home in Scotland. A brooding, stone mansion in the middle of no where Highlands. The following confrontation is exciting, clever and more memorable than any of the other Bond films. We get to understand a little of M and the choices she had to make. We see a very human side of Bond that was briefly explored when he met his love of his live in Casino Royale. There's only one major Bond girl Sévérine (Bérénice Marlohe) complete with shower, plus other no name dalliances, because he's Bond after all. The door is open for more in the series. It will be hard to top this one.
(Review by reesa)