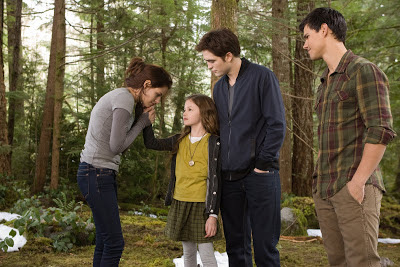 It's finally over! The last movie of Stephanie Meyer's Twilight book series. Too bad they didn't start out with this one instead of the last four yawners full of teen angst at one movie too long. Director Bill Condon who also did Part 1 is back with the 2nd half of the 4th book. Melissa Rosenberg's script starts from when Bella just turned vamp wakes to her new life. At last Bella is now a more attractive and interesting character.

Bella Cullen the new bride and mother wakes from her transformation. The title sequence showing Bella's awareness of everything around her is a good promise for what to come. Being a newbie vamp makes Bella incredibly strong and extremely hungry. She makes her first kill. ah....ew.... OK, this is supposed to be so romantic. Bella comes home unaware that Jacob (Taylor Lautner) has “imprinted” onto her new born daughter whom they blessed with the impossible name of Renesmee. There's a whole werewolf thing in Jacob's tribe that the person to which you are imprinted becomes their soul mate for life. Jacob and his “Nessie” are and will be inseparable. Not before Bella has her say. Then there's the problem with telling Bella's dad Charlie (Billy Burke) about how Bella is like Bella, but not. Suffice to say Jacob takes off his shirt.

Bella is no longer the awkward, clumsy and shy high school student. She's 18 and will be forever. Edward (Robert Pattinson) has finally found someone, making their uneven numbered family unit even and paired up. Carlisle (Peter Facinelli) and Esme (Elizabeth Reaser), Rosalie (Nikki Reed) and Emmett (Kellan Lutz) and Alice (Ashley Greene) and Jasper (Jackson Rathbone) and now Edward, Bella and Renemee make up the clan. The Cullen's give the young couple a beautiful romantic cottage in the woods all pointedly decorated in shabby chic. The rest of the family stays at the Cullen modern glass and wood compound. This new Bella is as she says, “born to be a vampire.”

Renesemee is the fast growing vampire/human hybrid ever. She also has a gift of being able to communicate with everyone by her touch. She's a cute, creepy CGI infant/child with a benevolent countenance. She is later portrayed as a young girl by Mackenzie Foy. Unfortunately their relative Irina (Maggie Grace) sees the young girl and reports to the Vampire rulers, the Volturi's, that the Cullen clan has created a forbidden child immortal. Centuries ago vamps thought it was cute to make little ones, but they never matured and hungry babies are not so cute anymore. Alice sees a vision of the Volturi coming. She and her boyfriend/brother Jasper take off. She leaves Bella a note with clues on how to create an extract route for Renesemee and Jacob in case things go south. Meanwhile the Cullens have to convince witnesses from their friends and relatives regarding the peaceful nature of Renesee. They gather 18 of them to help face off a hundred black hooded Volturi's.

The Volturi leader Aro (Michael Sheen) is as oily as it gets. His two powerful henchkids Jane (Dakota Fanning) and Alec (Cameron Bright) are always ready to inflict pain and confusion. The battle is probably the best vampire/werewolf mayhem to date. It's fun watching the good “veggie” vamps vs the bad human eating vamps go at each other. The characters all get a moment to flash their special powers and kick some butt. Like on Heroes or Alpha's these vamps have different types of “gifts”. One has the power to influence the elements, one has electrical power, Alice can foretell, Edward can read minds, and Bella also discovers her power. Granted that this book series is about the Bella/Edward/Jacob triangle, but these magical vamps can be the next big TV series.

It's a nice send off for what has been a very uneven ride. The ending credits include cast pictures and names from all of the movies. It just makes one wonder what it would have been like if some of the secondary characters had been explored as they are in the books. The Twilight hysteria will probably continue for a few months before becoming and annual marathon for twihard fans. Good thing the last film was the best of the bunch.
(Review by reesa)