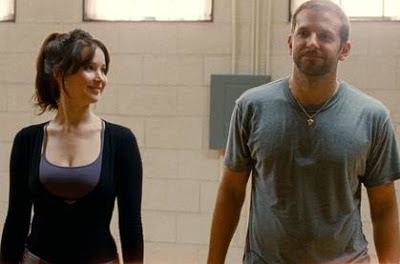 Is it too early to start predicting Oscar considerations? This new film directed David O. Russell (The Fighter) and wrote the screenplay adaption from a book of the same name by Matthew Quick hits the theaters with an emotional bang. The simply amazing performances by Bradley Cooper, Robert De Niro and specifically by Jennifer Lawrence will awe and astound and touch your heart in this life affirming story about marriage, sports fandom, and mental health. Doesn't sound like a great recipe for cinematic flavor, but it sure is tasty!

Bradly Cooper plays Pat Solitano, Jr, who has been committed to a mental hospital in Baltimore for the past eight months. He's been going to his therapies, but he's been cheating on his meds. He's lost weight, feels ready for the world has a new attitude with the key phrase “excelsior” which to him means seeing the world in a positive light and looking for that “silver lining” of success. His mother Dolores (Jacki Weaver) comes to take him back to Philadelphia because his sentence is up even as his doctors protest that he's not ready. Former high school teacher Pat suffers from an undiagnosed bi-polar disorder what was triggered out of control when he discovered his wife having an affair in their shower. The violence he suffered on his wife's lover is what had him committed. Everyone walks on eggshells around him hoping that he will not have another “episode”. His dad (Robert De Niro) wants Pat to indulge him in his OCD sports addiction to the football team the Eagles. His father has been bookmaking after having lost his job and pension. He hopes to start a Philly steak sub shop from his winnings. Pat is too obsessed with gaining back his wife Nikki (Brea Bee) despite everyone's warnings that there's a restraining order in effect.

Friends Ronnie and Veronica (John Ortiz and Julia Stiles) invite him over for dinner where he meets Veronica's sister Tiffany (Jennifer Lawrence) another damaged soul who was just widowed by the death of her policeman husband. Pat is attracted to Tiffany, but he's single minded in his pursuit to show Nikki that he's remade himself. His wily therapist Dr. Patel (Anupam Kher) suggests that helping Tiffany could be seen by Nikki as a positive gesture. Tiffany has the ability to straight talk Pat while everyone else is wary of his mood swings. The trigger song “My Cherie Amour” always sets him off in a manic state, Tiffany manages to calm him down. Tiffany offers to get a letter to Nikki in exchange Pat must be her dance partner in a competition. For the first time his parents notice a change in Pat as he leaves to practice at Tiffany's studio house every day.

Bradley Cooper finally is just not another pretty face giving a more nuanced performance. Jennifer Lawrence should be one of the front runners for a nomination. Robert De Niro is a wonder as the father trying to find a way of communicating with his son and Pat's daffy mother played by Jacki Weaver is so perfect even though she has very little lines to play. The standouts supporting players like John Ortiz as Ronnie who may seem like he has it all together, but is stressed out by his job, his controlling wife, and a new baby, Chris Tucker as Pat's nutty friend from the hospital, and Dr. Patel as the football fanatic therapist.

Their bittersweet relationship is spiked with sharp insightful dialogue that's abrasive and filter free. They say what they feel and what they want at any given time yet their vulnerabilities are on the surface. David O. Russell changed the dynamic between the father and son from the original story due to the personal relationship of Cooper and De Niro being good friends in real life according to the Author Matthew Quick. The mental health issues of the story doesn't distract from or try to manipulate your feelings in a negative way. It's just how these people have to deal with those chemical imbalances yet still be able to have fulfilling and satisfying lives.
(Review by reesa)