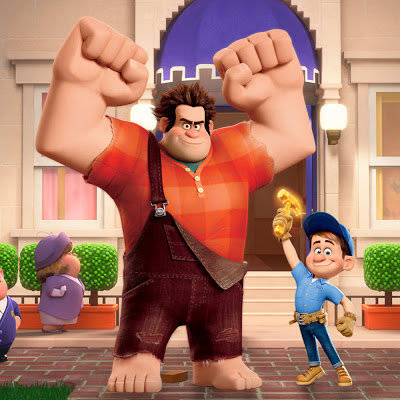 Ever wonder what the pixelated characters of 80's video arcade games do when the lights go out and everyone goes home. In Tron like fashion, the denizens of the various games ride down the electronic wires and meet up at the gateway of all the games at Game Central Station located in the power strip where they interact with each other. This is the world created by director Rich Moore (The Simpsons, Futurama) and writers Jennifer Lee and Phil Johnston (Cedar Rapids).

Wreck It Ralph is an old school game like Pac Man with a very simple animated quest. Ralph (John C. Reilly) is a big burly guy who beats down an apartment building, and the human player has to get Felix (Jack McBrayer) the Mr. Fix-It guy to come repair things before the building collapses. Ralph is getting frustrated with his lot in life. He's tired of being the bad guy. At the end of a winning game, Felix gets cheers from the apartment residents called the Nicelanders and Ralph gets tossed from the roof into a big mud pile. Ralph also attends a weekly group therapy session with other bad guys who suffer from the same type of regret. As a bad guy no one wants to hang with you after the game is over. He's determined to win a medal which he believes will change everyone's attitude towards him. He hears that at Hero's Duty he can get a medal for bravery. Sergeant Calhoun (Jane Lynch) can't be distracted by Ralph's shenanigans because she's battling a nasty computer virus with her platoon. One of the Cybugs stows away on one of Calhoun's spaceships that Ralph uses to get away when she finds out he's infiltrated her game. He crashes lands into Sugar Rush a brightly colored Candy-Land race car game. He meets up with Vanellope von Schweetz (Sarah Silverman) who wants to compete in the races but can't because she's got a computer glitch. The bratty little girl steals Ralph's medal so she can stake her spot on the race line up. Sugar Rush is run by the dictator King Candy (Alan Tudyk) who doesn't want Vanellope to race, which is explained later in the story. Ralph and Vanellope decide to work together in an uneasy reliance when her race car is destroyed by the other competitors. Ralph having abandoned his game puts the Nicelanders and Felix in a predicament. Without a villain there is nothing for Felix to fix. An Out of Order sign is put on the game, and they are facing disconnection unless Ralph comes back. Besides all that, the Cybug has bred little Alien type eggs in the Sugar Rush's game program.

Visually this movie is a wonderland of color and style. The different game environments are well thought out, and detailed. But what makes this movie stand out is the very human type of relationships between the characters. Sad sack Ralph makes you feel for his situation of not getting appreciated by his game family. Vanellope embraces her glitches, Calhoun isn't as hard core as expected, and Felix realizes he can't be a hero without Ralph. The frantic pace keeps the movie hopping only stopping long enough to let the characters have some introspection. The lesson of not knowing what your got til it's gone is a good one for both parents and kids.
(Review by reesa)

Email ThisBlogThis!Share to TwitterShare to FacebookShare to Pinterest
Labels: Wrreck it Ralph review