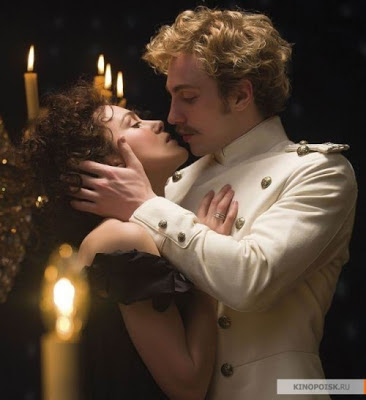 Leo Tolstoy's novel published in 1877 has been made into at least 13 different movies since 1914. It's hard to beat the 1935 melodramatic classic with Greta Garbo and Fredric March as the ill-fated lovers. The Joe Wright directed version with a screenplay by Tom Soppard shakes up the genre by filming on a single soundstage at Shepperton Studios in a dilapidated theater. The gorgeous costumes by designer Jacqueline Durran and the production design by Sarah Greenwood fill the screen with eye candy. The whole effort feels like Baz Luhrmann's Moulin Rouge! You feel any moment people will start singing and dancing. Perhaps they should have gone that route.

Keira Knightley as Anna is the queen of costume epics. Her beautiful angular face and pale skin works well as the aristocratic wife of a Russian government minister. Married at 18, she's the mother of a son and a dutiful wife of a passive husband Alexei Karenin living in St. Petersburg which was considered the cosmopolitan center of Russia. Anna learns her brother Stiva Oblonsky (Matthew Macfadyen) has been cheating on his ever pregnant wife Dolly (Kelly Macdonald). Anna begs her husband to let her go to Moscow to run interference to save her siblings marriage. On the train she meets Countess Vronskaya (Olivia Williams) who has a bit of a reputation. She tells Anna that it was better to love than never to have loved at all. Anna is intrigued as she's never been love. The Countess meets her son the dashing calvary officer Count Alexei Vronsky (Aaron Taylor-Johnson). Anna and the Count barely see each other in passing, but the Counts is immediately smitten. A railway worker accidentally falls in front of a train and is killed. When Anna is concerned for the man's family, the Count makes a show of giving the official money for their care.

There's a little side story with Stiva's friend Konstantin Levin (Domhnall Gleeson) a shy aristocratic landowner comes from his estate to woo the young beautiful Kitty (Alicia Vikander). Kitty rejects Levin's overtures as she has her eyes set on Count Vronsky. But at the ball the Count is tracking Anna. The chemistry between them becomes an obsession. The attention poured on her by the Count is not lost on Kitty and everyone else at the ball. Despite knowing that what they are doing is wrong, Anna can't help falling in love. She even returns to her husband and tells him that the Count is now her husband. She is so blinded by the overpowering hormones and happiness she can't stop herself even knowing that the affair will make her a pariah in her society as an immoral woman. Knightly tears up the screen as the emotionally wanton Anna. Her reputation is wrecked, but in the typical mores of the times, the Count will remain unscathed. Her insecurities over the Count's committed love to her becomes her undoing.

The scenes are mostly framed by the stage, or the wooden catwalks, and even the audience area and box seats. Sets change behind the actors and the action in a fluid motion that takes time for the brain to accept. It's a clever device, but it's often distracting. Some of the scenes are rhythmically choreographed with the dialogue and music. Interesting moments pass quickly then it's off to Annaland and her out of control lust for the piercing blue eyed young playboy. Lovely to look at, but ultimately too flawed.
(Review by reesa)