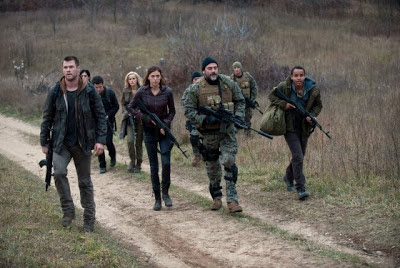 The remake of the 1984 cheese classic Red Dawn with Patrick Swayze and Charlie Sheen was actually shot in 2009. Studio management juggling led to it's shelving until this year, when the Chinese protagonists had to be changed to North Koreans for political correctness and appeasement. Instead of the teenage militia hiding in the Colorado wastelands, the band of high school kids are running around the woods of Spokane, WA. The target audience have never seen the first movie which had Soviet, Nicaraguan and Cuban troops landing by parachute on the football field as they witness their teacher getting shot. The violence is toned down in the new version with death and destruction only happening to the bad guys or off the screen. Stunt coordinator Dan Bradley is directing a screenplay by Carl Ellsworth and Jeremy Passmore. The action sequences are well played pulling out all the predictable scenarios.

Matty Eckert (Josh Peck) is the start football player in high school although he's got the penchant to take unnecessary risks and make fool moves. It's frustrating to his dad the town sheriff (Brett Cullen) and his older brother Jed (Chris Hemsworth in pre-Thor mode) who is home from the Marines. Matty is more concerned with his main squeeze Erica (Isabel Lucas) in typical teenage male mindset. One morning the town wakes up to the sound of heavy planes flying and soldiers parachuting down to their suburban neighborhood. Jed goes into solider mode, grabbing his brother and his friends and head out of town as their father runs interference. Matt is unable to save his girlfriend who is led off by the invading soldiers. The panicked young people get to the Eckert cabin in the woods where they have also gathered a few more stranglers following them. Jed organizes them quickly, but as expected there's one bad apple that lets the enemy know where they are hiding. Jed gives them the patriotic speech and trains them to become fighters. They start using guerrilla tactics engaging the occupying force and stealing weapons. They undermine Captain Lo (Will Yun Lee) by writing “wolverine” on the walls to claim their work and inspire the populace.

The first movie by John Milius was astonishing violent and earned the newly created PG-13 rating. The relationships of the characters were more intense and the real life threat of the Soviet nuclear power struggle was relevant for it's time. The idea of the North Korean's coming to a small town of Spokane, WA and taking it over is like, “WTF?”. The idea in the plot is that the US was defeated by an EMP blast, like in the current TV show Revolution. Only in this town the cars still work. But if you ignore those considerations, the story is aimed at action sequences that pop one after another while making the audience root for the intrepid teens. Little is given on the psychological effects of teens killing people, only justification for their acts by exercising their rights as free citizens of the good old USA. Outside of the obvious thought that this small town would fall so easily to an invading source, with only a handful of kids fighting them, they movie does try to get one caught up in the heartfelt relationship of the brothers. And of course cheering them on when they shoot those bad guys.
(Review by reesa)