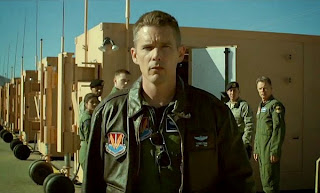 I will watch anything with Ethan Hawke in it, but this one felt flat and didn’t really explore its interesting premise. I can’t believe this was written and directed by the same guy who has written one of my favorite movies of all time, The Truman Show. Well, then again he also wrote and directed one of the worst films of 2013, The Host.

Director/Writer Andrew Niccol explores, or at least tries to, what happens to pilots in the military and how they were once the heroes in the air to heroes in a chair operating a drone hundred’s of miles away. They do say, “Chair Force”, so that was pretty clever; and that’s where the cleverness ends. That’s pretty interesting, right? Exploring a pilot who has been flying for years and is now reduced to the equivalent to some guy playing Call of Duty in his basement eating Cheetos and drinking Mountain Dew is pretty intriguing. I am that guy who he is equivalent to and I can say that’s pretty much accurate, except I drink Mountain Dew: Code Red because I like living on the edge like that. You can think of the toll it will take on a seasoned pilot and how it can affect his psyche. They don’t explore any of that and really just scratch the surface. Not to mention, it’s really repetitive. It’s literally scenes of Hawke’s home life and scenes of when he is in the giant tin box in the middle of the dessert playing Battlefield. I wouldn’t mind that, but it’s boring and uninspired. I felt there wasn’t any creativity put into the scenes and the actors were just there reciting lines. Andrew also explores the violent, grotesque nature of the Middle East and how some people are awful, committing rape and whatnot really fueling Ethan Hawke and his motivations. He also touches on government take over with the drones, but once again, it feels rushed and under developed. Great ideas at play, just not explored enough.

Let’s jump into the acting, kids! Listen I love the Hawke (that sounds like a crappy hairdo from the 90’s) but this was a misstep for him. His character wasn’t fully developed and he felt one-note with some characteristics that come out of nowhere with no explanation or real depth. Speaking of flat, boring performances, January Jones doesn’t add much to the film. She felt like she was there and some of the decisions she made, that could be justified, made her look like a bad person. Listen, January is attractive and she shares her name with my birth month, I am pretty sure that means we are soulmates and I am ok with that, but I haven’t accepted her as a good actress yet. I know all of you are probably yelling at your computer screen, which would be awkward if someone came in right now and saw you yelling, to watch Mad Men. Whenever I feel like slicking my hair back, grabbing a cigar and drink some Scotch, I will watch Mad Men; but here she hasn’t proven it to me or the other film roles she is in. I thought she was enjoyable in The Last Man on Earth and that’s where I draw the line. She always seems to have the same tone and personality in every character she has played. Zoe Kravitz is also in this film and she does well. I have nothing more for her character.

The cinematography is clean and nice to look at but nothing ground-breaking. With story getting repetitive, the shots also seem repetitive in a few scenes involving the drone pilot area. The editing was an issue as well. I felt like the whole film was disjointed and scenes would just end. It felt choppier than a lumberjack and beaver having a contest on who could chop more wood. It’s a terrible analogy and joke, but I am about as funny as a joke on a Laffy Taffy wrapper so that’s what you get. Despite all the choppy editing, the movie just ends abruptly. That’s how it felt to me.

Mr. Niccol, if you read this, please don’t hate me, even though I will be on your hit list now, I really do respect most of your work. I love The Truman Show so much; but I felt like this was a bland, under-developed, repetitive, idea that could have worked and been a great modern war film. I really can’t recommend it. I have seen worse movies, but this one I didn’t care for at all. 2/10
(Review by Chase Lee)