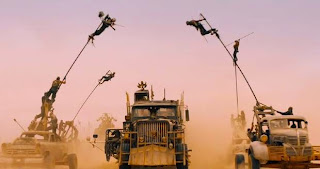 It's hard to imagine that there's a whole generation who have not experienced the original Road Warrior with Mel Gibson. The writer and director George Miller is back with an update to that scenario including the epic tricked out truck and car chase across a stark forbidding landscape. Filming took place mostly in Namibia and the breathtaking cinematography was done by John Seale who came out of retirement to shoot the film. This is visually popping eye candy treat with intense action sequences, minimal dialogue, heavy on the angst and uber violence.

In the year 2060, civilization has fallen, nature has become a wasteland, water has become a premium. Trying to survive is Max (Tom Hardy), a former highway patrolman who lost his family in the beginning of the collapse. He's captured by a group lead by a tyrannical fascist leader, Immortan Joe (Hugh Keays-Byrne) who runs the War Boys with promises of taking them with him to Valhalla. Women are treated like chattel, being kept pregnant and milked. Water is parsed out to the survivors, and Joe controls that too. Captive Max is used as a blood bank, having a universal blood type, which they tattoo on his back. Nux (Nicholas Hoult) is transferring Max's blood supply in his veins, when he hears that Imperator Furiosa (Charlize Theron), the one armed driver of their war tanker truck has taken a wrong turn and not heading to the gas supply depot. That's because Furiosa has taken the Joe's Five Wives whp hope to be taken to the Green Land where they will not be used as womb slaves.

Max is hooked up to the front of Nux's car with a Bane type mask and chains while continue pumping blood. The chase is on across the desert for the tough, no holds barred Furiosa. After some hellacious action moments, Max manages to get free of his captors, although he has to bring an unconscious Nux along as he's still chained to him. Joining with Furiosa has some moments of distrust, but eventually they realize in order to survive and get away from Joe and his War Boys and the other factions who have joined the chase means they must cooperate. Max and Furiosa both prove to be competent and unflinching road warriors.

The story seems to be less about Max and more about Furiosa and the women who populate this world. For hardcore fans of the original franchise this may not sit well, but for today’s more enlightened mindset it would be more apropos. Theron plays a wonderfully unique character and Tom Hardy does Mel Gibson's Max a run for the money. The action shots are mind boggling and fun, the violence is what to expect without being too bloody and horrific. It's a rip roaring adventure, with incredible costumes, makeup and set decoration. The stunts will have you edge of your seat. But when it's all said and done, nothing can outdo the first Road Warrior film. Maybe a good reason the visit the original 1981 film and how it influenced all the apocalyptic stories that followed.
(Review by reesa)