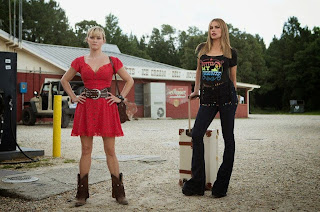 Buddy road movies depend heavily on the chemistry of the two lead actors who are usually polar opposites to beef up the differences and possibly the humor. In director Anne Fletcher's (The Guilt Trip, The Proposal, 27 Dresses) new film written by David Feeney and John Quaintance, the unlikely pairing is Reese Witherspoon and Sofia Vergara. The movie relies on running jokes that have to do with age, height and facial hair. Despite the hectic pacing of the film trying to milk out laughs from almost slapstick moments, the endearing relationship of the women is what saves this from being totally annoying.

Witherspoon plays Cooper, an OCD cop who wants to live up to her late police father's excellent reputation. She works in the property room after she caused a fire on someone from her taser. Her boss Captain Emmett (John Carroll Lynch) assigns her to accompany Dallas Federal Marshall Detective Jackson (Richard T. Jones) to deliver witnesses to court to testify against Vicente Cortez (Joaquin Cosio), a major drug lord. She is needed to chaperone Daniella Riva (Sofia Vergara). Their first meeting establishes their differences of style, size, and attitudes right away as Riva is packing her stiletto shoes that she refuses to leave behind. Two separate gunman break into the house and start shooting Riva's husband and the Marshall, leaving Cooper without her gun or radio. She manages to get Riva out of the house by taking the red convertible in their garage and making a run for it. Soon they discover that Cooper has been suspected of shooting Mr. Riva and the Marshall and is on the lam with Mrs. Riva.

Thus begins the road portion of the movie as they have to change clothes, fight, bicker, and save each other from being caught by dirty cops and drug lord hench men. All the while Riva is wearing high heels, tight clothes and dragging around a suitcase full of shoes. They have girly moments talking about Cooper's lack of love life and the death of Riva's brother. They try to distract a cowboy into thinking they are lesbian veterinarians before he shoots off his finger. They encounter Randy (Robert Kazinsky) sleeping in the back of a truck they had stolen who finds Cooper fascinating and helps them out as they try to make their way to Dallas avoiding road block checks.

It's a noisy movie. The two leads are funny and comfortable with each other and Riva's throw away comments about Cooper are sometimes hilarious. It's an easy movie to kill an afternoon and you don't want to wait for it on Netflix. Or you can go watch Avengers again.
(Review by reesa)