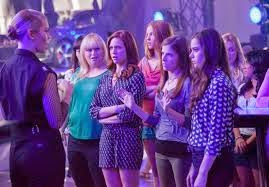 Ok, pitches, the all woman acapella group for the fictional Barden University are back with another Glee-ful adventure. Directed by Elizabeth Banks and written by Kay Cannon, the story occurs three years later. The Barden Bellas have won the National Championships every year since then. This is the senior year for most of the Bella's so if they plan to continue this franchise, they will have to replace the cast, or have them come back for some reason like they did with Glee. And you know how that worked.

Banks does double duty working in her debut directing job and also playing podcaster Gail Abernathy-McKadden with the offensive John Smith (John Michael Higgens). Their tasteless, sexist, and racist commentary while live broadcasting the acapella performances are uncomfortably amusing. We are supposed to accept it and not be offended, right? But frankly the comments are cringe worthy. The opening scene is a ridiculous costume malfunction involving Fat Amy (Rebel Wilson) that causes the Bellas to become suspended from the rest of their performance schedule. They are being replaced by the European champions Das Sound Machine, a German group led by Flula Borg as Pieter Krämer and Birgitte Hjort Sørensen as Kommissar. Their group is all military precise and flawless. The only chance for the Bellas to get back their glory is to compete in the World Acapella Championships, and the Das Sound Machine would be the ones to beat.

Entering into the new mix is Hailee Steinfeld as Emily Junk. Her mother Katherine (Katey Sagal) was once a Bella, so Emily is let into the Bellas as a legacy. She trains with the group, but the women are at their lowest at the moment. It's hard for them to find their sound and harmony. Becca (Anna Kendrick) has started a new intern job at a sound studio with Keegan-Michael Kee as her boss who is making a Christmas album with Snoop Dogg. Fat Amy is having a fling with former TrebleMaker singer Bumper Allen (Adam DeVine) and Benji (Ben Platt) is all sorts of stupid in love with Emily. The high strung Chloe (Brittany Snow) suggests they go on a retreat to try and find their sound again after their disastrous performance at a private Riff-Off party of a rich acapella fanboy (David Cross).

There's a lot of characters in mix that add little side dialogue during major scenes. The wonderful Lilly (Hana Mae Lee) and her whispered comments and Flo (Chrissie Fit), an illegal Guatemalan who drops some woeful life experiences of her own. Everyone gets their little moments which is all fine and good, but makes the movie sort of frantic and aca-noying. Its the vocal performances are what will make this another hit. So if you love Glee, you will enjoy this!
(Review by reesa)