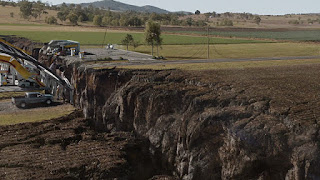 Everyone loves a good disaster movie, even ones that don't involve sharks and tornadoes. Plus if it has Dwayne “The Rock” Johnson on board as the main hero, it's guaranteed box office fun to start the summer. Writer Carlton Cuse and director Brad Peyton (Journey 2: The Mysterious Island), offer a story with predictable dialogue and heavy on CGI mayhem. The April earthquake in Nepal that flattened many villages and cities leaving hundreds of thousands homeless, this movie will hopefully enlighten those living on the California coast, that building and populating areas on a major fault line is probably not a good idea. Neither is fracking in Texas.

The simplistic story line centers on Johnson as Ray Gaines who works as a LA Fire Department rescue helicopter pilot. The harrowing first scene has him rescue a young woman whose car went over a cliff and now dangles precariously on the side of a canyon. This is the first clue that the continuing movie means you should buckle in and enjoy the ride. Ray who is separated from his wife Emma (Carla Gugino) is having trouble accepting she is moving in with stupid rich boyfriend Daniel (Ioan Gruffudd) who is creating the tallest building in San Francisco. He's flying Ray and Emma's daughter Blake (Alexandra Daddario) to the bay city in his private plane with all sorts of reassurances that he's not trying to take her beloved fathers' place in her life. At the fancy building in SF she meets Ben (Hugo Johnson-Burt) and his little brother Ollie (Art Parkinson) as Ben his applying for a job with her new step dad to be.

Meanwhile at the California Institute of Technology, Lawrence (Paul Giamatti) and Dr. Kim Chung (Will Yun Lee) have discovered that their current research about earthquake swarms may be able to predict major quakes. While they gather information of an unknown fault on the Hoover Dam, the first big quake hits destroying the dam. Soon other major rumbles are set off along southern California and they are moving northward. With the help of reporter Serena (Archie Panjabi), he tries to get the word out through the media of the impending doom.

The film does impart some important information to those actually caught in an earthquake of “drop, cover and hold on” to protect oneself from falling or flying objects. That landlines will work when cellphones are out. And emergency preparedness along with a family communication plan for such events is something to think about in our own lives. The movie however suffers from an over abundance of spectacular destruction. But wait that's not all! There's a tsunami thrown in there for good measure. While millions of people are crushed, fall into crevasses, burned and drowned, we don't see their bodies as the story keeps us focused on Ray and Emma going to SF to save their daughter. Blake using her survival skills learned from her father, manages to impress Ben and Ollie as they try to find high ground for her father to come to rescue them. Girl power for having the young woman being the most resourceful.

Johnson does get a actual moment to display a little bit of dramatic angst while explaining the conflict that broke up his marriage. But the rest of the movie if filled with dumb forehead slapping verbal nonsense in between buildings falling over or errant shipping containers falling on the Golden Gate Bridge. It's a mindless adventure, that is both thrilling, fun and forgettable.
(Review by reesa)