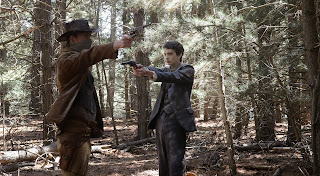 Imagine being a kid, you have your favorite stuffed platypus named Earl and you are about to go to bed. You have everything in place except another human mouth to sit next to you and read you a bedtime story. You have one of your parents read you a great western fable and describe all the graphic violence in detail. This movie came off a violent bedtime story and I highly enjoyed it.

As a first time full-length feature Writer/Director, John Maclean gives us a slow (pun intended, I am surprised I didn’t use this in the first sentence) fantasy feel to the western genre and feels different and definitely a breath of fresh air for this genre. How is it unique? Well, the style and color palette. It’s as if Wes Anderson stumbled into a bar late at night, drank a lot of wine, took home a drunken cowboy, had a colorful one-night stand filled with great set design and nine months later, made Slow West. That’s not a knock (ed) up on it because I loved the visual aesthetic and really gave the story a voice. With that said, I do believe this was also a short, semi-rushed, story with some under-developed characters and random plot points thrown in so they can tie up everything at the end. The biggest thing is that it’s only an hour and fifteen minute movie. It felt rushed as if Maclean had nothing else for the characters and had to end it as fast as possible. There were some character attributes that I really enjoyed for the most part; I just didn’t feel any weight when certain things would happen because I felt like I didn’t know them that well.

The acting is actually very strong and everyone gives a very good performance in their respective characters. Michael Fassbender is always great in everything he is in and this is no exception. He is a very convincing cowboy and can pull off that gruff, mysterious element that most cowboy characters have in westerns. That’s right ladies, if you combined this character and his character in Shame, you will have a hell of a stripper for your bachelorette party. I felt like Fassbender had the most development out of everyone, which is weird because not much is really given about his character, but I could kind of see his past and what his personality is just by his performance. Kodi Smit-McPhee (I actually remembered how to spell that and not look it up and that’s ok if you don’t want to believe me) does well for what he is given. I kind wish I knew more about his past, but the conclusion of his character makes sense given the traits and philosophies of his character. Ben Mendelsohn is always great in everything he is in, but his character felt under-used and under-developed. That makes me cry on the inside because he is a very versatile actor like Mr. Michael “Cowboy” Fassbender and there wasn’t really anything for him to do. The other plyer in this cast is Caren Pistorious and her character suffered like Mendelsohn did. Her character was fine and had a purpose, but it was under-developed and I felt like I didn’t know her well enough. It’s like if you took the hottest chick to prom because you were physically attracted to her, but you realize you know nothing about her and you two just don’t click and now all you have is an awkward dance partner and you wish you were watching movies instead. If you are wondering why that analogy is so descriptive it’s because that actually happened to me. I would have watched a movie about prom than experience it.

The cinematography is another plus. Every shot was like a beautiful, vibrant painting you would see at one of those western shops in a mall somewhere. I live in Texas and I see these all the time. It was simply gorgeous and really added a cool contrast from all the bloody, brutal violence. Kind of how it was back in the day, beautiful scenery but is clouded with disgusting animalistic behavior that really shows what humans are like. The pace is fine. Now, it’s a very short film and my one complaint on that is I wish it was longer (something that will never be said about a Michael Bay film). I wish there more scenes, more character development and more beautiful scenery. It’s a slow movie, but the curiosity on how it is going to end will intrigue you as it did for me.

I love a good western and, despite some of the problems I listed above, this is a great breath of fresh air on the western genre and Fassbender needs to play another cowboy because he killed it in this role. I recommend this one. 7.5/10
(Review by Chase Lee)