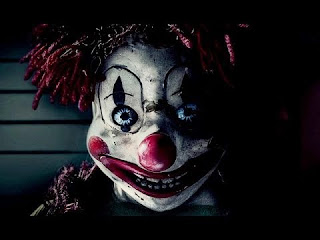 They're coming and They're here. It is hard to top a 1982 era Spielberg film but Sam Raimi and Gil Kenan sure want to try. They have enlisted the help of Sam Rockwell (his usually comic quippy self) is Eric Bowen and modern mom RoseMarie De Witt is wife Amy. Kyle Catlett, Saxon Sharbino and cutie pie Kennedi Clements are the kids - Griffin, Kendra and Madison (Maddie). Jared Harris is Carrigan, the House Cleaner, straight off of reality TV, accompanied by ex wife Dr. Claire Powell (Jane Adams) and her two helpers. It is often felt that the casts of classic films cannot be easily replaced but this cast tries hard and does a pretty good job. Sam Rockwell is engaging and Kennedi is engaging as the chubby cheeked youngest family member who holds the interest of the souls under the house.

The family moves in to their new house, but we soon discover dad is jobless and the credit cards are maxed out, true to the economic of the day. The kids want their old house back and Griffin has nervous and anxiety issues. The 2015 kids are a little bit mouthier, a little more disrespectful and much more plugged into technology. The TV is a large flat screen and electrical surges fry the cell phones and IPads. The original Poltergeist was new and original, full of creative ideas and imagination, packed chock full of classic scenes and lines. Many of those carry over in tweaked form. Obviously taking place in modern day, a toy drone makes an appearance and the ghostbusters have some amped up technology. The clowns are back and have multiplied. A demon squirrel has appeared. The tree is in constant waving view overhead and does some pretty cool things thanks to CGI and the pool has been replaced by the homes very foundation. While there are a few jumps and quick screams, most will not judge the movie as scary, mainly due to the predictability of the story. Offered in 3-D, it really doesn't make great use of the technology in ways that it could have (think room with objects flying- could have been AMAZING- here, not so much) Relatively short at 1 hour 33, the rising action moves little too quickly for this reviewers taste. Chaos break loose the first night the parents are out on a dinner date. Just not enough quick, creative and creepy goings on to satisfy the ultimate climax of the story. The HELP comes in quickly and doesn't ever seem to get really settled in over a period of time. The scares and viewer anticipation of them is just different enough on this outing that one does remain interested and a little on edge. The original moved the family through innocent occasional observations, a deepening interest and fascination with the entities and their antics, to concern to fear and finally all out terror.....plus a hint of a continuation. Those transitions are not quite as apparent in this rendition and the hidden credits scene takes it off a different direction. The family seems a little too calm, taking it all in, in fact Dad never really seems all that scared, panicked or upset. The only remote freak out is a short one from mom and of course kids when getting attacked by the tree, the foundation and the closet. It is just so odd that all this stuff is happening in the house by the creepy old tree and no one is ever outside watching things going down. The neighborhood just seems deserted with no body home. Guess everyone is hanging out underground, as we found out during the dinner.
(Review by Cheryl Wurtz)