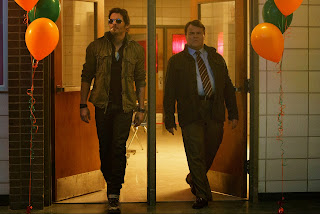 The more I thought about this movie, the more I hated it. I love Jack Black and James Marsden, but this was a miss for both. I think where the problem lies is within the way it’s written and the way the characters are written.

Directors Andrew Mogel and Jarrad Paul craft, what seems to be a buddy comedy, into something where the characters are unlikable, dumb and naive, and didn't buy into the decisions they were making. Dan, played by Black, is a normal man who has a family, kids and a cozy job. He is also a committee member of a group of high school kids he graduated with to get all of their classmates to join their twenty year reunion. Dan is an outcast and isn't really respected. I can understand that because I have witnessed that in my own life. Dan is home one night and sees a commercial for Banana Boat with Oliver Lawless, played by Marsden, as the spokesperson. Lawless graduated with Dan and was one of the most popular kids in the class. Dan goes back to the committee members and suggests that if he gets Oliver then a lot more people will register for the reunion. So, Dan fakes a business trip to Los Angeles to his boss, played by Jeffrey Tambor, with Tambor tagging along to meet a potential client, but Dan is flying to L.A. to meet Oliver to convince him to come to the reunion.

There are some things that happen in L.A. that really put this obsessed Dan into high gear. I won’t spoil anything, in case you want to see it, but essentially, Dan does anything with Oliver to convince him…like do cocaine. It’s stuff like this that makes Dan very unlikable. Throughout the movie he is so obsessed with Oliver that it’s a complete turn-off and I was wondering why? If it was a ten-year reunion, I could understand. But since this is a twenty-year, you are 38, obsessed with a classmate you haven’t talked with for twenty years. You are doing drugs, gambling your job for what, a reunion weekend with a classmate? I just hated Dan and his extreme obsession with this guy. It made no sense with everything at stake like that. Also, he ignoring his family and his older son doesn't help his cause either. I could understand drinking with him and trying to be buddies with him, but going to these extremes, for a reunion? Nope. Oliver is also written as a D-Bag and I didn't care for him either.

Kathryn Hahn, who I absolutely love, plays Dan’s wife and she is a bit oblivious for a few scenes and her character is more likable at the end when I sympathize with her, but other than that, she is just there to feel bad for at the very end. Jeffrey Tambor’s Bill is also clueless throughout most of the movie and when Dan reveals that the business trip is fake, you feel bad for Bill and he even suggest to Dan on how to have avoided this whole situation with his job and could have gotten a plane ride out there for the weekend, instead of burning company expenditures. Wow, so you could have avoided getting fired, and your boss tells you how to not get fired. OK.

The thing about the story that makes me madder is that the ending has Dan way worse off than the beginning of the film and he didn't learn anything. There is a speech at the end with Dan on Facebook typing a “heartfelt” message saying, “Be you. There’s a little Oliver Lawless inside all of us, waiting to get out.” Sure. So, be a party animal and totally negate anything in your life like your family, job and friends? Once again, you are 38. These are a few problems I had with the movie and there are many more, but I know there are people out there wanting to see this, so I will let you experience this D Train wreck yourself.

The acting is fine and everyone does well for what they are given. The cinematography is clean and it’s well lit and shot, so nothing to complain about. The pace of this movie became much slower as soon as Dan started making bad decision after bad decision. I can feel the movie come to a grinding halt. The soundtrack was cool and I will give it a point for that and the acting. Maybe I am in the minority, because everyone around me loved it. I don’t know, but what I can tell is that it didn't work for me. 2/10.
(Review by Chase Lee)