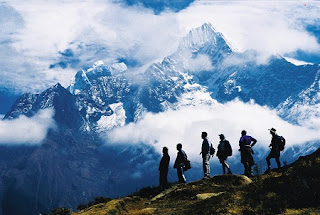 Anyone that climbed Mt. Everest is a beast and should be among of the most awesome people on the face of the planet. I will never be in that club of people because I cry every time it gets below forty degrees. On a serious note, I have to be careful of what I say because I know a lot people have passed while climbing this mountain and a lot of families have lost loved ones and I am deeply sorry for their loss. I liked this movie overall, but I have some problems with it. Let’s get reel and break down Everest.

Pros:
On one hand, I really enjoyed the second half of this film as it brought: intense, perilous action sequences, emotional weight for the characters, and some pretty great performances. I feel bad for saying this, but when the storm hit and people were still stuck on Everest, that’s when I was locked in and really tensed up. Towards the tail end, I finally connected with the characters and felt their emotional gravitas.

Cons:
The writing is a bit thin and basic to fuel along this film, that’s not a bad thing, it’s just nothing spectacular. The first half of the film is choppy and I didn’t feel like I was connecting with any characters because none of them were fleshed out, minus the basic reasoning’s of why they were climbing Everest.

Pros:
Everyone was fine and serviced the movie and its story. Jason Clarke and Keira Knightley, however, gave the best performances, but they didn’t shine until the second half. But honestly, no one stood out or really made a memorable performance, not even Jake Gyllenhaal.

Cons:
I felt like I didn’t know any of the characters, but that’s more of the writing, and I could tell the actors were trying. The coupling of Jason Clarke and Keira Knightley was off for me and I didn’t feel the passion, the second half they brought their “A” game, but at first it was rocky.

Pros:
I love the epic, cold, barren scope of the film and, for the most part, had some really well shot sequences really putting you in the situation and feeling the threat of nature. I saw it in IMAX 3D and it helped the experience.

Pros:
The second half flies by and really grabs you and doesn’t let go, but the first half is a bit slow. The build-up is at a snail’s pace, but the payoff and climax are totally worth it. If you are interested in this Everest journey that was based off of an expedition in the 90’s, then you will like this movie. I will put it this way, I was more fascinated by the actual people that this movie was based off and I wanted to research them more after I saw this film.

Cons:
Some of green screen shots are really noticeable and it took me out of the movie a little, but overall it isn’t bad.

Overall:
This is an epic movie that brings the intensity you would want in a Mt. Everest story, but also the emotional weight you really want to connect with these characters, even though the first half is messy. It’s all about the journey and how a journey ends, and that’s why I am going a tad higher since I had my problems with it.

Score: B
(Review by Chase Lee)