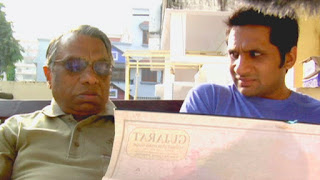 Make sure you go MEET THE PATELS! And take your entire family with you! This a charming, romantic comedy documenting Ravi V. Patel’s real life journey to discover his true love with a lot of guidance and misguidance along the way from his family, the Patels. For better and for worse, we all have experienced the love and chaos of well meaning friends and family members. You will laugh and be brought to tears as you witness the life-changing love story of Ravi V. Patel.

Ravi is a 30 year old, first generation Indian-American who struggles with combining his American and traditional Indian heritage. He has been dating a white American woman in secret for two years. He breaks up with her and travels to India with his parents and sister where he feels the cultural and social pressure to get married.

MEET THE PATELS has universal appeal because in the end it is really a film about family. In fact, it was written and directed by real life sister and brother, Geeta Patel and Ravi V. Patel. What began as vacation video of their annual family trip to India, metamorphosizes into a heartwarming and hilarious feature film about love, family and cultural identity.

Part of the charm of this film stems from the fact that you are watching real life family videos that do not have perfect composition or lighting. You will laugh about it in the beginning moments, but you will soon forget and forgive this technical aspect, as you become a silent member of the Patel family. Yes, this is a documentary but it feels like a narrative film. Creatively, animation is also used to move the story along during descriptive monologues and conversations. Most likely this was because there was not (useable) film footage but it really works and takes the film to a higher level.

In MEET THE PATELS, we get a glimpse of what it is like to be an immigrant family. Immigration is truly a brave and courageous act. Every ethnic group that moves from one country to another deals with keeping their traditions and values alive. And each member of a family is affected in a different way. Our country is a great melting pot of cultures. All our ancestors at some time or another made the choice to move here and with that choice brought consequences both good and bad. In this film, you feel for Ravi’s parents who knew that coming to the U.S.A. would bring better opportunities but they struggle daily with the fact their children have grown up in a different culture and have different values.

This film often gets compared to MY BIG FAT GREEK WEDDING in the Press, which I feel is an appropriate comparison. Both films deal with immigrant parents and their first generation American children finding love outside their cultural tradition. In both films, the parents desperately want their children to have their same experience of marriage and family. And both movies are brilliant, romantic comedies.

For me, seeing this film was very special and hit very close to home. I have been that “white American girl” who dated a first generation American-Indian boy. And over the years, there have been many funny family moments. My experience has been one of understanding, friendship, and great love that continues to influence my life deeply in every way possible.

The filmmakers spent six years making this film and a few more trying to get it into theatres. Believe me, it was all worth it.
(Review by Erin Nicole Parisi)

Posted by Dallas Movie Screenings at 9:53 AM