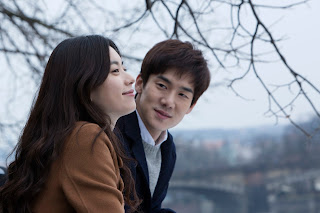 In this different take on a love story, a man named Woo-Jin has a condition where he turns into a different person each day. He already has a few people who know of this but later he has to tell somebody who he has fallen in love with. This is where the film’s beauty takes place. The challenges of dealing with this fictional condition are expressed through the character’s emotional state at different stages of his life. Something that surfaced understanding in me was a scene where Woo-Jin at 18 years first discovers himself as a different person. As an audience, you are so scared of how his mother will handle it and you see this boy completely distraught. The mother actually hugs her child despite his unbelievable situation which is one of the most important notes of the film. His longtime friend, Sang-beck, is definitely the comedic relief of the narrative. He is a jokester and can get drunk easily. In the weirdest situation between the two characters, Sang-beck asks Woo-Jin, who is a woman then, to have sex with him. Knowing that the circumstances could not play in real life, I found that so outrageous but perfectly fit in to the scene. Woo-Jin is a furniture designer who actually builds his own things. Some of the pieces used on screen were just so smooth and modern. I was very impressed by how his job was inputted into the making of the picture. The woman who becomes Woo-Jin’s love, E-Soo, is a beautiful and focused woman. The character puts everything into her work and slowly is able to accept Woo-Jin’s habit of changing. There is an ingenious scene where E-Soo sleeps next to Woo-Jin to see him change in the morning. At the time Woo-Jin is also a woman and they just face each other with serene happiness. Trying to be with someone and having something that inhibits that is completely transported to our minds while watching this. It is a fantasy story but it is shot in such a valid way. Some of us have experienced an obstacle like that before and a relation is made. A major take away from this story was Woo-Jin’s closet. We see it in the second half of the time and there are so many different styles of apparel. The fiction just wraps around our heads even more. This was a love story with such thought that it surpassed a lot of more casual Hollywood romances.
(Review by Wyatt Head)

Email ThisBlogThis!Share to TwitterShare to FacebookShare to Pinterest
Labels: The Beauty Inside review, Wyatt Head