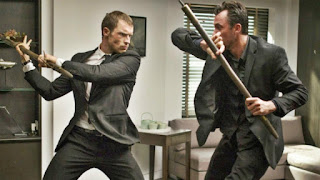 The Transporter: It was payday and I went to the local gas station and I realized it was fewer than two dollars a gallon. I filled up my car for twenty dollars and I was super happy. I was so happy that I went to Olive Garden to treat myself with a good meal because it was payday and I filled up my car for cheap. I left the restaurant and I got in my car to start it, once I revved up my car it just stopped. I realized someone stole my gas with a hose and replaced it with sugar. At that moment I was unfueled.

That title seems long, boring and isn’t engaging at all, even as you keep reading it and hoping it gets better…it doesn’t. That is exactly what this movie is.

Plot: In the south of France, former special-ops mercenary Frank Martin enters into a game of chess with a femme-fatale and her three sidekicks who are looking for revenge against a sinister Russian kingpin.

Pros:
The “relationship” between Frank, Ed Skrein, and his father, Ray Stevenson, was an intriguing story aspect that I would have liked to seen explored further.

Cons:
The writing is atrocious with terrible dialogue being uttered out of everyone’s mouths, and not even in a cheesy, fun way, but more of a cringeworthy experience for your ears. The story is very bland and even when the job is completed and the transporter can go home to Netflix, more plot is added to stretch the movie out and it doesn’t fit well, especially when it’s supposed to have that fun, action tone of the Transporter franchise. The action sequences were dull and uninspired. I am not saying be ambitious with every action set piece, but at least try and do something with your particular signature and make it exciting. Along with the action set pieces, the fight choreography is flat and it looks like they kept the rehearsal take instead of putting in the real take. The overuse of slow-motion drove me crazy and it was mainly used on the Audi car. This was basically an hour and half Audi commercial And lastly, I didn’t care about any of the characters and what was happening; it felt like the actors were going through the motions. Speaking of that…

Cons:
Every single performance had little to no charisma and it was about as wooden as your prom night (that joke was funnier than all the actors in this movie trying to deliver comedic relief). I didn’t see The Transporter 2 or The Transporter 3, but I did see the first transporter and I did like Jason Statham. I felt like Statham brought a lot more charisma to his character making us like him more than Skrein.

Pros:
At least some of the action sequences had some steady camera shots so we knew what was going on? Michael Bay stayed away from those certain shots.

Cons:
I don’t know what the obsession is of having the camera on a subject, in a talking scene mind you, and having it do a quick zoom in, but it needs to stop. If it’s a mockumentary or a documentary, it’s fine because it adds a sense of realism of actual people and events as if we are watching it and the subjects are unaware that there is a camera in the room. They do this in several scenes and it’s not a style or a flare to the scene but more annoy than anything, especially if it’s after each shot then cuts to the next shot and does it again.

Cons:
For an hour and half movie, it dragged to a point where I couldn’t wait for it to be over. Since there was nothing elevating this movie into something we haven’t seen before with the action genre, it’s generic and flat, making it feel twice as long.

Overall: A boring, bland action film with little to no substance with the story or its characters to make us care, feel excited or, simply, to have fun with it. Skip this one and stay home to whittle down your queue on Netflix (I realize that is two Netflix references in one review, that you guys know I don’t have a life).