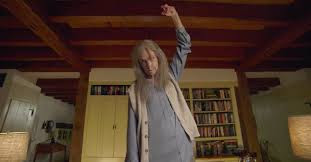 He is back, there is no more dusk, it’s M. Night-time. This was the best opening I had and…what’s that? Reesa just fired me.

Plot: A single mother finds that things in her family's life go very wrong after her two young children visit their grandparents.

M. Night is really good with bring the thrills and making some suspenseful sequences and The Visit is no different, but there’s a catch. There is more comedy to this film than in any other film of his. Now, his others movie weren’t void of any comedy as there were some funny written moments, but this one had a more noticeable stamp of comedy than any genre. You heard me right; The Visit is more comedic than anything else. However, it also has a nice blend of drama and suspense lurking in the background. It’s a mixed bag of genres to give us the strangest film M. Night has ever made, and that’s not necessarily a bad thing. The writing is also good and really has some nice emotional moments with strong dialogue. He is in the process of regaining trust in critics and audiences from his recent retched lineup of films and I think this is a great start. I am trying to keep details about this movie vague because I don’t want to spoil anything; I am not about that life.

I really dislike the marketing of this film because it is playing off the suspense alone and really hides the comedic and dramatic tone to it. I am trying to give you a heads up as best as possible, do not watch the trailers.

Everyone brings a certain gravitas to their roles and really sink their teeth into them giving genuine emotions, and authentic creepiness. All the actors and actresses are equally good and the grandparents are the definite winners and the kids are a close second.

I am actually one of the few people who can backup found footage movies, as I feel most of them, excluding a small group, can really deliver an engrossing, terrifying experience putting you in the action. This one is actually the cleanest one I have seen in quite some time. What do I mean by that? It isn’t shaking all over the place. Most of the shots are very stable and we can clearly see what is going on, even when it does shake. The weird thing is it is actually shot very well with some effective shot composition. This is also one of the few found footage movies that actually was shot by the main character holding the camera, and most of the movie was shot from the perspective of the main character, except…

…a few establishing shots of the house that clearly looked like it was at the time the kids stayed in their bedroom. Again, vague and I don’t want to spoil. The thing is with found footage movies is that there are shots that are clearly shot by another camera when you know that the main character has “the” camera with maybe another one held by another. But there also some shots to where it looks like it was shot by something else and doesn’t feel like the main character shot it.

This is one of his shortest films clocking in at an hour and a half. I was engaged by the mystery looming over this film that I was glued from the beginning. To be honest, all of M. Night’s films, even the bad, kept me locked in throughout the mystery.

If you hate found footage movies, you might this boring and a bit monotonous, but if you enjoy them, you will enjoy the ride. Even the first third, which is notably the slowest parts of a found footage movie until the thrills kick in, flows well just like the rest of the film.

If you were skeptical about M. Night, even for me too as a fan going in, I think you will be pleasantly surprised by The Visit. It’s a unique film among his resume, but it’s guaranteed to bring the thrills, laughs and hard-hitting drama. His past few films aren’t good, but this one has him back on track to become one of the greatest again, even when the bar was set very, very low.

Score: B
(Review by Chase Lee)