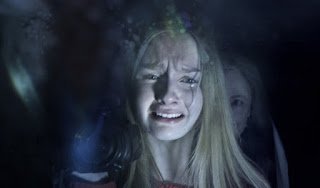 That’s it. I’m out. After suffering through “The Visit,” I am out unless M. Night Shyamalan ever does an “Unbreakable” follow-up. He showed so much promise with the pretzel-twisting thriller “The Sixth Sense” back in 1999. Then Shyamalan achieved near perfection with his next Bruce Willis entry, “Unbreakable,” in 2000. But Shyamalan has offered nothing but disappointments since “Signs” (Grade: B+) back in 2002. He followed that up with “The Village” (2004), a letdown (C+), and the fiasco “Lady in the Water” (C-). The disappointments continued with the annoying and pretentious end-of-the world spoilings of “The Happening” in 2008 (C) up until the ultimate summer bummer of the poorly acted mistake “The Last Airbender” (D+) in 2010. He struck out again with Will Smith in “After Earth,” a flick where Smith helps develop the story. I gave that abysmal flick a C-.

In “The Visit,” a brother-sister duo, Tyler and Becca (Ed Oxenbould and Olivia De- Jonge), go to visit their grandparents. Kathryn Hann’s persona as Mom is estranged from her own mother, hence part of the plot twist. In lieu of cursing, Tyler yells out names of Carrie Underwood and lady singers, like “Katy Perry!” Becca is a filmmaker working on a documentary about the family. There’s a show on Adult Swim called “Robot Chicken” wherein various puppets are used to demonstrate a stand-alone tale. A while back they made fun of his ideas by stating, “What a twist?” Nowadays, any Shyamalan film always has some ridiculous plot twist. Trust me when I say this is not worth full-price admission. Wait a while for it to get to the discount houses. You will thank me later. Grade: C-
(Review by Ricky Miller)