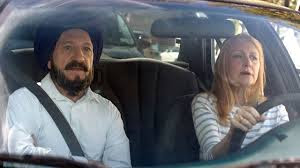 There's always a place for small personal types of stories without car crashes, bombs exploding, and people under the age of 30. Spanish director Isabel Coixet with writer Sarah Kernochan presents a quiet examination of a heart broken woman and her friendship with her Sikh driving instructor that doesn't involve sex. It's friendship for the sake of friendship. Two people with lives that would not normally connect in an everyday life, find solace and support of one another.

Patricia Clarkson plays Wendy, a book reviewer who falls into a cab driven by Darwan (Ben Kingley) while breaking up with her soon to be ex Ted (Jake Weber). She can't understand why he's found another woman. Her emotional turmoil is a rocky road and her daughter Tasha (Grace Gummer of the Meryl Streep stable of budding actresses) encourages to learn to drive so she can come visit her in Vermont. Darwan, who comes back to Wendy's house to give her an envelope that she left behind in the cab, leaves Wendy his card offering driving lessons. Wendy calls to make an appointment for a lesson, gets reluctant, using the excuse that Ted will come back to her. He's the one that drives them everywhere. Darwan manages to get her into the car with his mild calm attitude that reassures her. Thus begins their relationship as they talk and learn from each other.

Darwan lives in a small apartment in Queens with other Sikh's who are not in the country legally including his nephew. Preet (Avi Nash) encourages his uncle to accept the matchmaking by his mother to a woman from his hometown. Jasleen (Sarita Chouldhury) is coming to the country and they are to be married, never having met, on the day after. Darwan who embraces his Amercian life used to be a professor back home, but gained political asylum working as a cab driver and driving instructor. His new wife is uncomfortable in the culture change and Darwan's exacting opinions.

Wendy comes to terms with her new status, enduring the anger of having to sell their house as part of the the divorce settlement. She has to move to a smaller apartment compared to her nice brownstone and find resolve in her new life eventually attempting to pass her driving test. Based on Katha Pollitt's essay about taking driving lessons on the collapse of a marriage, the only lesson that is learned is Darwan's advice for driving and in life. “The driver's biggest problem is everyone else. You can't trust what they will do”. While the movie is nice the story should have been about Jasleen's assimilation into Darwan's world. That would have been a more compelling.
(Review by reesa)

Email ThisBlogThis!Share to TwitterShare to FacebookShare to Pinterest
Labels: Learning to Drive review