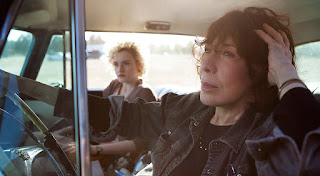 This touching small film tells the story of a grandmother, Elle, who is reached out to by her granddaughter, Sage, in need of urgent cash to get an abortion. They then try and seek out various ways to get the money by re-entering people’s lives with not so good consequences. The grandmother played by Lily Tomlin carries the film the whole way through with her bluntness and motherly ways. The best aspect of this story was how the relationship between the grandmother and granddaughter was displayed. Although Elle is strong, she is not a scary person to Sage and she tries to help her in any way possible. This story was also about a change of heart of people. Relationships go through volatility in real life and here it is nothing different. I absolutely loved the appearances of famous actors Sam Elliot, John Cho, and Judy Greer. Of course Cho had a serious couple of lines which I could not take as real in the wildest comedic scene in the film. Sam Elliot brought a calm and hospitable attitude that soon became anger which brought fantastic contrast. Judy Greer accurately displayed a longing for love from Elle as a younger character who is possibly stuck in a rut in her life. The first scene has Elle calling Olivia, played by Greer, a footnote of a relationship. One thinks about how harsh that sounds to both characters especially when considering their academic backgrounds. The main boy from Paper Towns also makes a turnaround appearance as the jerk of a jock who impregnated Sage. That appearance was startling to me as the actor pulled it off. The audience realizes Elle’s loneliness and sadness that covers her existence. When we first see Sage explaining the focus of the film, we instantly think of youth lacking sexual responsibility. The scene brings up familiarity in our surrounding world and within our families. I thought it was brilliant how Elle went into overwhelming debt and how she cleaned it up while cutting her credit cards. Little parts like that showed her endurance and willpower. I thought this was an entertaining sort of day trip film with surprises at every corner. There is tension, love, and laughter all blended into 80 minutes which really brought taste to this experience. Instances of tension in Elle approaching friends trying to get some money were expertly written like one that’s in a café. These 80 minutes was a wonderful treat that reminded us of the care that is always hidden in Grandma even if she is different from us.
(Review by Wyatt Head)