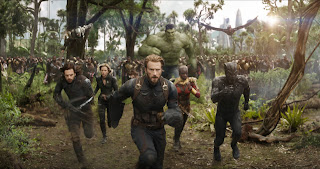 Marvel heroes join together onscreen
Prepare to get your eyes peeled for the most anticipating film of all time. You heard me, it’s Avengers: Infinity War. Now featuring the returning cast of the first two Avengers films, the film also includes the Guardians of the Galaxy squad, Doctor Strange, Spider-Man and other characters from previous Marvel films.

The Russo brothers who helmed Captain America: The Winter Solider, one of the best Marvel films ever, made their ways to the directors’ chair to create the most awesome catastrophic event of the year to not only adults, but also teenagers as well (in the age of 13 and over). This is an exciting move for Russo brothers to let all the Marvel superheroes come to life together on one, big movie. The Russo brothers have an enough time to put more time and commitment of getting the characters interact with each other face-to-face in different scenes. I know it would surpass DC’s Justice League due to stunning backgrounds, usage of good CGI, and the high stakes of the characters’ performances over the courses of this film and the previous Marvel films. What’s awesome is the villain, Thanos (portrayed by Josh Brolin) plays the serious role of a villain to the heroes from different planets and dimensions.

The plot and the background are very well done from the filmmakers as well as making the Robert Downey Jr. character interact with Benedict Cumberbatch character for the first time. The three Chris’s (Hemsworth, Evans, and Pratt) have done a smooth job on their serious roles. Those three can even lift their weapon [and their body] up in order to fight back. Even Chadwick Boseman steals the show to side with Chis Evans. Incidentally, the change of settings (like Wakanda and other planets) are very well-put together in one film, which is the hardest thing the directors ever done to digest this in order to balance all the characters’ onscreen time. The CGI is good for Thanos character and for the depth of the film. The music is very nostalgia from the Avengers films thanks to the legendary composer, Alan Sivestri. More surprising, I noticed the Red Skull, from Captain America: The First Avenger, is there to catch my eye red-handedly.

However, the ending is huge cliffhanger as it centers on the villainous Thanos. Gives me a heartbreaking feel to make this ending satisfying, yet tearful just like 1994’s Forrest Gump at the end. This is like the post-World War in the Marvel universe. And what’s missing is that Captain America never looked on Iron Man as they broke up in Captain America: Civil War. Nevertheless, they’ll make it back as show go on.

All of the actors and the Russo brothers fit the bill in this 150-minute massive production line for a superhero genre. To me, sounds like a “crossover between the legs,” meaning different characters in the same studio or league joining together compared to stunt gig Who Framed Roger Rabbit?, Wreck-it Ralph, Ready Player One, and other crossover films. If animator Walt Disney whose studio partners with Marvel sees this, he would be like “Mickey flows with Marvel.” Speaking of that, I would imagine what happens when Disney and Pixar animated characters come together in one movie. Hilariously, the jokes and pop-culture references are extremely funnier as I can imagine from those two jokers (Iron Man and Spider-Man) got a refreshing memory of their childhoods.

I guarantee that Avengers: Infinity War is a greatest (or not so greatest) movie than the previous Avenger sequel in 2015 and other Marvel films. This film is considered to be 10-Year Anniversary of the launching Marvel Cinematic Universe (or as I called it “The Marvel Renaissance”), beginning with 2008’s Iron Man. Though, my personal thought is this film didn’t topped over 2012’s The Avengers as the best Avengers film (I gave The Avengers an A+). I strongly recommend this movie for lots of people who just rush to the theaters like a pack of animals running like a stampede, boosting the box-office sales, and became the world’s best superhero film in 2018, but wait till May 2019 as there is a continuation of this film will be release on this date. It is worth getting this on Blu-ray or DVD when they get released in the next several months. Let’s not forget that there’s more exciting features on the way, including Pixar’s Incredibles 2 (June 15th), Solo: A Star Wars Story (May 25th), and Deadpool 2 (May 18th).