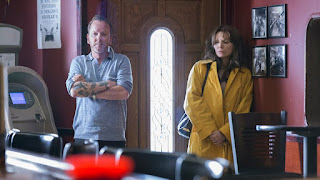 WHERE IS KYRA?
*** (out of ****)
One of the opening shots is a fascinating and disconcerting one: The titular character stands in the right-hand side of the frame – or so we think – and her ailing mother sits in the left-hand side. The younger woman is preparing a bath, and when she has finished and it is time to place her mother into the tub, she enters the frame from the left side, approaches the bed, and sits offscreen on the part of the mattress and in the part of the shot that is unseen by us. Only her hand, as it grasps the old woman’s shoulders to lift her to a standing position, is now visible. She had been preparing the bath in view of a mirror. That was how we saw her in the shot when it started.

Director Andrew Dosunmu and cinematographer Bradford Young often devise shots of casual complexity like this in Where Is Kyra?, which relies on our disorientated disposition to lure us into a morally challenging final half-hour. Michelle Pfeiffer’s performance as the eponymous Kyra, often capturing via longshot, is also paramount to this rising feeling of unease. It would be doing the film a disservice, though, to call it a thriller. The only element here that suggests a component of that genre is Philip Miller’s score, which is really just an occasional intrusion of a sharp sting in the otherwise silent soundtrack.

The story is an incredibly insular one, in which Kyra’s mother (played by Suzanne Shepherd) dies, leaving her daughter in an ever-growing mountain of debt as she continues a job hunt that has gone on for two whole years. She meets and falls hard for a local nursing-home employee Doug (Kiefer Sutherland), and then a mysterious figure, draped in her mother’s clothing and walking with her shuffling gait, appears around the city. The central mystery surrounds who this figure is and why she seems to be cashing the dead woman’s checks, and the major conflict involves Kyra’s imminent eviction from her home.

It’s a story (written by Darci Picoult) of economic desperation, bathed in the muted browns and greys that reflect Kyra’s situation. It’s a richly atmospheric experience first and foremost, and Pfeiffer, who is captured in suffocating close-up when not in those longshots, gets better as this situation gets pricklier. The mystery isn’t much of one, really, but the conflict has an emotional texture that is hard to shake. The final shot of Where Is Kyra? is an extended portrait of desolation, reflecting the movie that has proceeded it, and the cumulative effect of it all is rather sneaky.
(Review by Joel Copling)