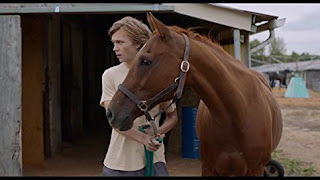 Coming of age stories are a dime a dozen, but since it's from A24 you can be sure it will be a bit different. Based on the novel of the same name by Willy Vlautin, it is written and directed by Andrew Haigh. It's a serious toned look at the inner workings of a lonely 15 year old young man who attempts to save a race horse from being sent to the slaughterhouse. Charlie Plummer, who plays the young teen, won the Marcello Mastroianni Award for Best Young Actor or Actress at the 74th Venice International Film Festival.

Charley Thompson (Plummer, who played John Paul Getty III in All The Money in the World) lives with his dad Ray (Travis Fimmel). Charley's mom left him shortly after he was born. His dad moved him around depending on his work. The last place was in Spokane where he excelled in the school football and track teams. Charley continues with his running as he explores the new neighborhood where he finds the Portland Downs racetrack. His dad meanwhile is messing around with a married (but separated) woman from his workplace. Ray says half kidding that her husband is a big Samoan who may be ticked off with his wife's affair. Charley likes this woman better than the last because she makes a good breakfast.

Charley makes friends with a trainer at the horse track. Steve Buscemi is Del Montgomery who used to be a big name on the horse race circuit, but is down to a handful of horses that he runs mostly in off track races and county fairs. He hires Charley to help walk the horses and shovel the barn for $25 a day. Charley who told Del he is 16, earns a bit more as Del is impressed with his willingness to learn and help. Chloë Sevigny plays Bonnie the jockey who rides for Del. She tells Charley not to get attached to any of the horses. They are not pets. When a horse is not performing, they are usually shipped off to slaughter houses in Mexico.

One night Charley comes home to find the angry Samoan husband throwing his dad out the window. The police want to put him in child services, but Charley says his aunt is on the way. Charley sleeps in the tact room at the stables, visits his dad when he's not working. Charley asks his dad to give him his aunts phone, but since they had a falling out, Ray says not to worry. The eventual tragedy propels the rest of story of Charley stealing Lean On Pete, Del's truck and trailer in an attempt to find his aunt in Wyoming. His lonely, desperate journey finds Charley walking with the horse when the truck runs out of gas. We hear his inner struggle to make sense of his vagabond life with his dad, how he had gone to a friends house in Spokane and found out how real families work and he hangs on to that hope of a normal life. Along the way he meets up with homeless guy Silver (Steven Zahn) who almost derails his plan.

Charlie Plummer is a remarkable young actor who pulls you in with his innocent and plucky young man. His orphan outlaw is a haunting and sensitive portrayal that is doomed with frustrating conundrums that stand in his way. This is not a family film of a boy and his horse. (Spoiler Alert: The horse doesn't make it through the whole movie). It is a story that will stay with out after you leave the theater.
(Review by reesa)

Email ThisBlogThis!Share to TwitterShare to FacebookShare to Pinterest
Labels: Lean On Pete review