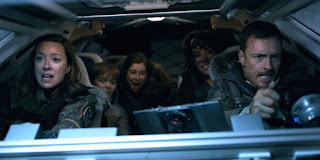 To me, TV’s “Lost in Space” (1965) was as hokey as television program that could not real hold my interest. The trouble is very dated “Lost in Space” with Guy Williams, June Lockhart and Jonathan Harris.

Another incarnation was done in 1998 with William Hurt, Mimi Rogers, Heather Graham, Matt Le Blanc and Gary Oldman for director Stephen Hopkins. This version did not fare any better, given the so-so visual effects and a ridiculous back story that did not go anywhere. On the A-F scale, I think I gave it a C-.

Now, NetFlix is putting their hands in the cookie jar by updating the whole premise for their take on the Robinson family and their predicaments and dilemmas in space. The newer version finds the Robinson family in a little bit of disarray with mother Maureen (Molly Parker) dad John (Toby Stephens). They are an estranged couple, who are trying to rebuild their marriage. The rest of the family include son Will (Maxwell Jenkins), daughter Judy (Taylor Russell) and other daughter Penny (Mina Sundwall). This all new 2018 tale is more fluid and dynamic compared with Hopkins mediocre version from the 1990’s decade that just felt kind of flat and uninvolved with characters one could care less about. The plot twists and turns are intriguing to say the very least. For the first time ever, Mr. Smith is a Ms. Smith with the usual indie darling Parker Posey as Julie Harris/Dr. Smith. That is only part of the intrigue, since the series takes some major shifts with the dynamics of the storyline.

The actors all fit the bill in this well done presentation that excels where the others have failed in the past. At this point in time, “Space” is contained to a 10 episode arc.

This new version is set 30 years in the future, so it takes some time and liberties with its setting and future telling.

Like NetFlix’s “Stranger Things,” one just watches the tale and forgets the pseudo reality they are watching and takes all the events as they unfold as pure entertainment. Nothing More, nothing less.