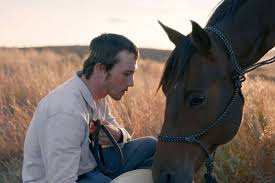 Writer, producer and director Chloé Zhao's new feature The Rider was recently nominated at the 2018 Film Independent Spirit Awards for best feature, best director, best editing and best cinematography. Zhao was also the first recipient for the Bonnie Award, named after Bonnie Tiburzi, which "recognizes a mid-career female director with a $50,000 unrestricted grant sponsored by American Airline at the Spirit Awards this year. The Rider premiered in the Directors' Fortnight section at the the 2017 Cannes where it won the Art Cinema Award. The Chinese born Zhao become fascinated by the Lakota cowboys on the Pine Ridge Indian Reservation while filming her first film Songs My Brother Taught Me. She came back a couple years later and met with an up and coming saddle bronc rider and horse trainer, Brady Jandreau who is a member of the Lower Brule Sioux Tribe and lives in Pine Ridge. A year later Brady suffered a crushed skull during one of his events and Zhao crafted her movie to tell the story of what happens when you can't be a cowboy any more.

Brady Blackburn played by Jandreau lives with his sister Lilly and their father Wayne Blackburn, played by his real sister Lilly and dad Tim. In fact everyone in the film is from or around the reservation playing fictionalized versions of themselves. Brady had just checked himself out of the hospital after a few days in a coma and now has a metal plate put in his head. He refuses to accept that he won't be able to ride horses again even if his body is showing symptoms of the brain damage. The next time he falls, it would probably be fatal. His friends treat him like normal dragging him out to drink and party while talking about their bronc riding careers. Brady is more mindful of his hero Lane Scott who was the best of them all who suffered a paralyzing injury and now lives in a rehab home. Brady visits him, playing videos of Lane's rides, encouraging him to feel again the pull of the reins and knowing that by the grace of the gods, that this could have been him.

The real life Brady had told director Zhao, that if a horse is injured badly they are put down. But because he's human he's kept alive leaving him to feel useless if he can't be what he was born to do. In the film, Brady tries to go back to horse training. Something the real life Brady does for a living now that he's injured. Some of the real life footage of him working with the horses before the days' filming was used in the movie. Brady is a real life horse whisperer having learned from his old school cowboy father and working with horses since he was eight years old. It's an intense dance of trust between Brady and the horse.

Another nice relationship Brady has is with Lilly his Asperger's Syndrome sister, who is bright and happy. Their little quiet conversations are very endearing. She also pasted little stars all over him while he was sleeping. While Brady is facing a serious crisis in his life, Lilly can be relied upon to raise his heart and spirit. Even when he gets to the point where he feels that maybe doing one last ride and going out doing the only thing he knows and was successful, he remembers that there are people who love him and rely on him like Lane.

The cinematography by Joshua James Richards captures the beautiful land and skyscapes of the Pine Ridge Reservation. The quiet story of the young man's personal dilemma is just a bit too slow for most movie goers. As an independent feature, probably not a big sell in the theaters, it will find legs in the smaller arthouses, or streaming services. It's a pensive and sensitive tale of first nation people that are completely unknown to city dwellers, but still resonate to everyone who has to reconfigure one's life.
(Review by reesa)

Email ThisBlogThis!Share to TwitterShare to FacebookShare to Pinterest
Labels: The Rider review