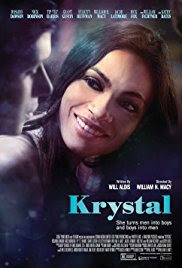 KRYSTAL
½* (out of ****)
At a certain point in the climax (if it can be called that) of Krystal, the eponymous figure, a down-on-her-luck single mother, learns a valuable lesson and receives a much-needed stepping stone toward the rehabilitative help she has needed. This is what is at the heart of Will Aldis’ screenplay, except the screenwriter’s heart is in the wrong place entirely. To wit, the way the film presents her with this opportunity is by having several characters shame her for being forced, by the economic and marital situations in which she has found herself, into providing for her disabled son through exotic dancing and sex work.

It is, as you can imagine, a pretty heartless turn for any movie, but this one is a special case: This scenario is not at all surprising in the context of the overall movie we’re dealing with here. Indeed, it might be the least weird thing about this movie, which is a very strange one. Krystal (Rosario Dawson), the former sex-worker and current adult dancer, isn’t even the protagonist of this story, which has been named after her. She certainly factors into it enough to be giving second billing in a credits context, but she is really a device for the coming-of-age of our real protagonist.

Taylor (Nick Robinson) has suffered from paroxysmal atrial tachycardia (PAT), which causes a quickening heartbeat at random intervals for no reason, since the moment in his childhood when his dog died. He imagines the driver of the car that killed his beloved pet as a demon, with burnt-orange eyes and a wicked smile, that shows up whenever he has a cardiac event. Curiously, though, the film doesn’t really know what to do with the condition until the end. Before that, the symptoms of the defect come and go as the screenplay pleases. It does, though, introduce this concept in just about the most off-putting manner possible.

After we learn that the second event to set off the defect was his innocent curiosity about an adult magazine, the film returns to the present, where Taylor stands on a beach. Another event is in process when Krystal, wearing only some swimsuit bottoms and a tank top (with nothing underneath it), runs up to assist him. The event intensifies upon Taylor’s realization of her (lack of) attire. So, Taylor is an uncontrollable horn-dog. Got it, movie. And in case we don’t get it, well, the plot hereafter, which has Taylor essentially stalking Krystal and using a fake name (Bobby) and thin façade (that of a pretentiously self-reflexive intellectual) to do so, will get the job done.

There isn’t much more to say, really. The plot is a thin clothesline on which to hang a series of would-be-wacky situations played for comedy, before taking a suddenly sincerer approach in the homestretch that goes entirely unearned. Krystal has a wheelchair-bound son (played by Jacob Latimore) to provide for and a violent ex-husband (played by Tip “T.I.” Harris), who shows up to provide some painfully egregious conflict. Taylor’s parents (played by William H. Macy, who also directed the movie, and Felicity Huffman) and brother (played by Grant Gustin) are all just annoying projections of Taylor’s most annoying personality flaws. And Kathy Bates shows up as Taylor’s wise mentor figure, apropos of nothing at all.

Macy directs this material with a blunt, lackadaisical misunderstanding of how to blend the comic elements with the melodramatic ones, though it is likely for the best. The comedy is never funny, and the melodrama that anchors it is permanently fixed to the least interesting characters present. Most of the actors, too, adopt bizarrely unbelievable accents regional to the Georgia setting of the tale, except without any signs that they were professionally coached to perform with them. All the while, Krystal herself, despite a solid turn from Dawson (the only actor to retain any dignity through this charade), remains a cypher. Krystal is named after her, and that isn’t able to be reconciled on the evidence of this floundering failure of conviction and conceit.
(Review by Joel Copling)