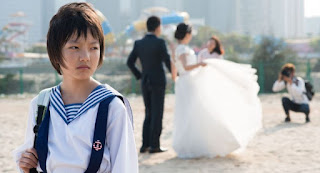 This film has been presented for the Asian Film Festival in Dallas. What makes this film so dramatic is the main character has a rougher role to deal with when circumstances beyond his/her controls have just hit the character too hard. Director Vivian Qu made an explanation on this film about how troubles can be conquer anyone’s attention and must find a way to get rid of it once and for all without falling apart. Actress Vicky Chen (as Mia) will show the audience on what was the main situation that troubles her easily when she caught an eye of the young two victims in the motel she worked at.

In this film, Mia works at the motel as a cleaner, receptionist and a housekeeper. One night, when a man, along with two girls, checked into the motel rooms, she witness the man assaulting his two girls during her worktime. She records the incident using her phone and keeps this video to herself in order to not to find out as well as losing her job and her reputation. But when one of the victims, Xiaowen (Zhou Meijun), came to light about the incident, the troubles soon increase her intentions and she must find a way to get rid of her troubles by solving the case whilst avoiding being fired from her manager.

This plot seems to be rough to watch as the main cast took their roles seriously compared to the crime films like “Who Framed Roger Rabbit?,” “Sherlock Holmes,” and other mystery fictional stories. Qu’s direction was a tad confusing as the some scenes where it involves investigation doesn’t add up to any expectations compared to any crime films. Also the script-writing is sometimes sloppy for the main characters. Though, I do enjoyed the performances from actresses Vicky Chen and Peng Jing, who receives a supporting role in the film. Even Zhou Meijun knows how to be a supporting performer to the main protagonist.

Overall, “Angels Wear White” is good with the main cast’s remarkable performances. I wouldn’t say it’s a bad film, it’s a film that really toughens other people’s emotions and their points of views when a mystery can or cannot be solvable throughout the entire course of this film. It doesn’t really add up much potential to it. If you love Asian movies, you can watch this to exhibit feelings and concerns about the characters, but I have you know, this is one of the most powerful films to see just like the animated “Grave of the Fireflies,” produced in 1988. Running time: 107 minutes