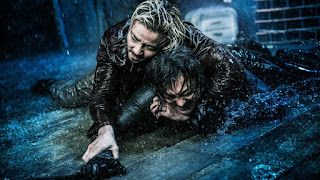 The opening night film of the 2018 Asian Film Festival Dallas was the 2017 Hong Kong action film directed by Jonathan Li. What sets this off from other high action packed cops and bad guys films of this genre, is that big moments in the last act is in the middle of a typhoon. One literally can't take their eyes off the screen as waves pound a small ship as the players battle each other to the death.

Hot headed and reckless cop Cheng Sai Gau (Zhang Jin) was on suspension for causing the death of a fellow officer by throwing a bad guy out the window crushing a patrol car with said cop inside. Cheng is a bit of a wild card, but he's effective and a bull dog when trying to solve crimes. His new case involves a gold smuggling ring by a gang posing as fishermen. The pilot of the boat Jiang Gui Cheng (Shawn Yue) has plans to take over the operation when his boss decides to name a smarmy "son" as his successor. Tensions escalate when the son decides to eliminate Jiang. Then Jiang goes after their boss to find the source of the gold, the big boss Kui (Japanese vet Yasuaki Kurata), who lives and works on a floating casino in untouchable international waters. Cheng talks his partner A-de (Wu Yue) into joining him in his investigation even though A-de has given in his resignation with plans to go to Europe. Unfortunately A-de is taken hostage, so Cheng and his desk jockey supervisor Chan (Gordon Lam) has to work with him despite his lack of experience on the streets and his follow the rules attitude. He is way over his head, but wants to prove that he can handle it.

There is no end to the action as Jiang seems to be one step ahead of Cheng as mayhem and bodies pile up in their wake. At times it's hard to tell who are the bad guys and who are the good guys. Cheng's fighting skills seem endless. There are some great chases through market places, over boats that crowd the harbor, and in seedy neighbor hoods of old buildings. This contrasts to the floating casino with it's rich clientele, and the underwater action searching for the gold. Cheng, with his dyed blond hair looks like a rock star, and Jiang is cruel and brooding with a bomb throwing girlfriend. Women basically are just a filler in this story with Cheng being the guardian of a young woman who was the daughter of a thug that he had killed. Of course the biggest set piece is the typhoon fight that's worth the popcorn, just ignore the plot holes that are so big to sink a ship.

Email ThisBlogThis!Share to TwitterShare to FacebookShare to Pinterest
Labels: AFFD2018, The Brink review