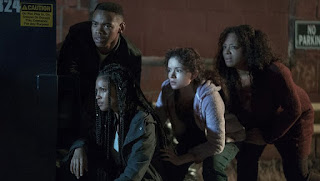 There are a very select few people who relish violence and death on the screen, I, however am not one of those individuals.

I already saw the other “Purge” movies, so spending my time with this one comes with a duty that is just part of my job as your at-large film critic.

Now, with “The First Purge,” Blum House productions went back into their piggy bank to dole out another chapter of the low budget franchise that will make another chapter that will undoubtedly turn another profit for the studio.

With “The First Purge,” Oscar-winner Marisa Tomei (1992’s “My Cousin Vinny”) makes an appearance as The Architect – Dr. Updike. With her experiment, as it were she wants to see if citizens can find an outlet to release their pent up aggression and hostility. It all sounds good on paper but when she finally sees the results firsthand, she is in shock and dismay. She does not realize the U.S. government is using it for their own ulterior motives.

Besides Tomei, the only other face common to us viewers of television and pop culture is actress Luna Velez. She was on Showtime’s “Dexter” for many a year as Capt. Maria La Guerta.

The rest are all new faces, which includes Lex Scott Davis, Y’Lan Noel, Jordan Wade, Kristen Solis and Rotimi Paul. Paul plays the creepy guy known as Skeletor, (A “He-Man and the Masters of the universe” reference) a villain in the story who is credited with the first purge kill. He just looks evil. He has tattoos splashed across his face and is just wicked and pure evil.

The bulk of the film’s setting takes place on Staten Island in New York state. Also interwoven into the storyline are flying armed drones that are used to wipe out entire families at the drop of a hat.

I just find the whole movie stupid, silly and preposterous.

Like I previously stated, I am not a fan of the horror genre in general. I find it futile to invest in characters when they are inevitably going to die.

But when it comes to horror-comedies, I am all in. I relished Sam Raimi’s “Evil Dead 2: Dead by Dawn,” “Zombieland” and the gem that was “Tucker and Dale Vs. Evil.”

“The First Purge” does what it’s supposed to do in re-introducing a pointless time-waster that one can just consume as a can of soda or soft drink.