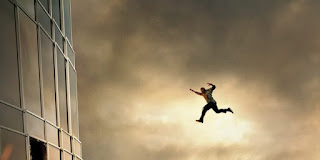 Director: Rawson Marshall Thurber Studio: Universal Pictures
“Skyscraper” is a fiery inferno for Dwayne Johnson!
Dwayne “The Rock” Johnson was known as his Luke Hobbs character in “The Fast and the Furious” movies, but not in this film. This film doesn’t set the course of a thrilling ride of a lifetime nor a good taste of any action movies, compared to “Die Hard” films. It is extremely a difficult to see Johnson’s character spring into action as part of the 30th anniversary of the famous action film, “Die Hard,” produced in 1988. In this film, former FBI agent, Will Sawyer who is living in the tallest and safest skyscraper, known as the Pearl, with his family. But when the group of terrorists have taken over the skyscraper, he must rescue his family from the tower before they get themselves killed.

As far as action films go, “Skyscraper” truly deserves a gold star on three things: the villains (including the leader Roland Møller), the humor, and Johnson’s performance on the second half of the film. It’s not terribly surprising that the terrorists group haven’t got any money nor taken advantage of a rich person’s (or people’s) values. These kinds of roles are really hard to play throughout the course of this film. Based on the events of this film, this film is a stunning callback form the aspects of 9/11. Extremely meaningless to come up with a story and casting, but Johnson is a best bet for this film after his “Fast and the Furious” films and the “Jumanji” sequel.

Although the rest of the film doesn’t sound very enjoyable as the plot is very cheesy and cliché. Same applies to the supporting actors Chin Han, Neve Campbell, and Noah Taylor. Even the child actors McKenna Roberts and Noah Cottrell aren’t helping at all. The film itself and the action sequences aren’t well-done for the action, thrilling movie unlike “Air Force One,” “Speed,” and “Top Gun” as well as not indulging the CGI methods being assisted for a greater height. Considering this action stunt-gig, Director Thurber also collaborated with Johnson in “Central Intelligence” which was okay according to the audiences.

Overall in this film, it seems okay but mediocre as Johnson’s character didn’t matched its level of Tom Cruise nor Harrison Ford. I highly rather rent this film rather than purchasing it. I wouldn’t want to watch this over again when it comes to action-thriller. I recommend you pick another action to see like “Ant-Man and the Wasp,” “Speed,” and other action movies I mentioned above. It was really tough to watch when Johnson’s Will Sawyer character breaks the ice in the wrong way. It’s not a bad movie, but considering how goofy much of the setup for “Skyscraper” is. “Skyscraper” would be like “Die Hard but with Dwayne Johnson all over.” Running time: 102 minutes