Ant Man and the Wasp 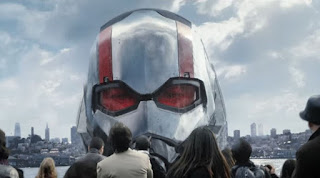 I really wanted to like this movie. The first “Ant-Man,” originally released in 2015 was a fun enjoyable ride. I think I gave it an A- that particular year. At this point in time, however, I think Marvel Studios will just keep on cranking out their usual 1-2 titles per calendar year. They already had their big blockbusters entry with “Avengers: Infinity War” this past April. What they failed to mention is this was just part 1 of the saga that will have two chapters.

I was not dazzled with “Ant-Man and the Wasp” in the very least. To me, this is one of the lesser Marvel Studios entries. I figured at some point in time, a Marvel entry would hit the “meh” category in their storytelling practices. This entry for me is exactly what I felt when watching this disappointing tale. I hate to say it, but at a certain point, Marvel-based entries suffer from a certain color palate.
Most of them have a certain monochromatic color dynamic which is not too bright, but just falters into the breeze without any said punch. Not to draw comparisons to anything in the DC universe, but this was to me what Martin Campbell’s “Green Lantern” felt like when everything was said and done with that particular title.

Paul Rudd must still be following his original work out from the first “Ant-Man” flicks because he still has the tight washboard abs. In “Ant-Man and the Wasp,” the pair must contend with a villain only known as Ghost, (Hannah John-Kamen) who has high tech beyond their means and who can just jump from place to place in an instant. Think of a more subdued version of what Doctor Strange (Benedict Cumberbatch) can do. She has help from Laurence Fishburne’s Dr. Bill Foster, who was an old ally of Dr. Hank Pym (Michael Douglas). So you know, family dynamics are a main part of the storyline here.

Another subplot involves Walton Scoggins as a small arms dealer, Sonny Burch, who cares little for human life as long as it is putting green into his wallet.

Also interwoven are returning characters involving Hank’s wife Janet (Michelle Pfeiffer) who has been stuck in the quantum zone for upwards of 40 years. She has a way of helping the Ghost, because she has a way of knowing the ins and outs of the alternate dimension in which she was trapped.

Rudd’s Scott Lang shares some great scenes with Evangeline Lily’s Wasp character, Hope Van Dyne, since the pair make for some great on-screen chemistry together. The duo each knows their next moves before they even happen, something important for their hand-to-hand combat sequences, especially when it comes to fisticuff battles with the enemy.

What amazes me is the CG (computer graphics) implemented to add grey to the beards of both Douglas and Fishburne as well as the way to make Pfeiffer still look so vibrant. Even at the age of 60, Pfeiffer is still a knockout.

Director Peyton Reed knows how to keep the movie flowing at an even pace. Like “Thor: Ragnarok,” Reed has a keen sense where to lace some comic timing into the mix. It is not in abundance, but just strikes the right chord in certain spots.

I did not dislike this movie in any way, but did shrug my shoulders quite a bit. It had everything in place, but as aforementioned the ooh’s and aah’s were completely missing in the end.