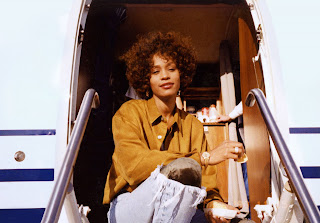 The global saturation of Whitney Houston began with her debut album in 1985, shot her to the stratosphere of stardom with the seven sequential number one hits generated from it. This British documentary by Kevin McDonald who is known for Marley and the Last King of Scotland, was made with the cooperation of Houston's family and friends. Their comments bear witness to the rise and fall of one of the most iconic performers of the generation. McDonald's use of news clips that feature the political and pop-cultural events of the times are woven into the tapestry of how and why the stage was set for her to make such an impact and how it affected her tragic fall from grace.

Whitney came from a family of singers. Her mother Cissy Houston was a prominent gospel singer and Cissy's nieces were soul veteran Dionne Warwick and her sister Dee Dee Warwick. Cissy brought her children up in the church where Whitney sang in the choir. Realizing Whitney's extraordinary vocal talent, Cissy started grooming her, teaching her how to use her voice. Her mother didn't want her daughter to be just another run of the mill pop singer, knowing her voice was meant for greater things. Whitney was one of her mom's background singers, when one night her mom feigned illness and made Whitney take center stage. She knocked the roof off. Soon music companies were fighting over her before she signed with Clive Davis. Whitney's beloved dad was known as a hustler, but to put it nicely, a deal maker. Her dad affectionately called her "Nippy" which stuck as her family name. Her dad began running her business affairs which included putting all the family members and close friends on the payroll. Her brothers became background singers and body guards. It was her brothers who also introduced her to drugs.

The film is filled with remarkable family video of the young and developing Whitney singing in the church choir. Even at that young age you can hear the strong potential of what she eventually develops into a world class performer. Family, friends, and producers contribute their memories and experience working with her. Even her ex-husband Bobby Brown talks, but refuses to discuss anything about drugs. The last part of the film focus's on her later decline in drug use and health. There is also a family secret that is revealed as people search for answers and possibly regret as to what they would have should have in respect to helping her survive. Whitney was a star so bright that left us too quickly. Fortunately her music remains.
(Review by reesa)