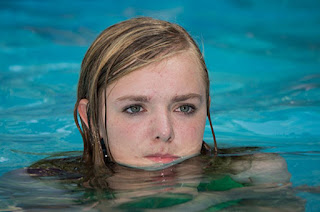 If you ever wanted to go back to middle school or junior high, here is your best chance. The film by Bo Burnham captures nearly every angst filled moment of a typical young girl, Kayla, in her final days as an eighth grader, to complete and excruciating perfection. Kayla is portrayed perfectly, to a T, by Elsie Fisher (Despicable Me) in all the glorious awkwardness befitting an invisible suburban eighth grade, self-conscious, introvert who hasn't had the best experiences in her last three years. But she maintains a positive attitude.

Eighth Grade is the first feature film for at from musician and comedian Bo Burnham, a 27 year old Massachusetts native, who became famous via YouTube. He wrote the screenplay and directed the mostly unknown cast towards a 2018 Sundance debut.

Kayla resides with her well meaning and caring single father (Josh Hamilton- Frances Ha, Manchester by the Sea) who tries as best he can to connect with his daughter, who he loves with all his heart. He just wants her to see herself as the special person that he sees.

Kayla spends alot of time alone, making inspirational self help advice videos for peers, that seem tailor made for herself. She is by far her own best cheerleader. She tries to put herself out to mingle with the typical groups: the popular kids, jocks, mean girls and creative types. She is clearly trying to be the best version of herself before she moves on to high school, while enduring a mixed pool party, being voted "Most Quiet" at an awards assembly, enduring acne and the inevitable hormonal fumbling advances by boys. She feels very misunderstood and wishes that peers knew her for the real person that she is inside.

She is her own optimist, trying to fight off anxiety attacks and awkward situations, while taking the occasional stand to put one particular queen bee in her place for being unkind. You will cringe with her, be anxious with her and run the extreme range of adolescent human emotion as her week unfolds.

Kayla experiences some genuine acceptance and happiness when she is paired with a very cool and kind older student who shows her the ropes of high school on a visit day and offers to be her mentor. There are moments of uncomfortable learning, coming of age and awareness of the R rated variety (language mostly) but that is real life for today's 12-14 year old. The life of a young teen in the digital age is realistically represented. All in all, this film is very very very REAL.

She experiences some epiphanies (we all remember learning what certain words actually mean), meets and befriends a kindred spirit in Gabe, and in the end reminds us that we are all the same in what we want; to be happy, to have friends, to have fun and to grow up with as few bruises, rejection and painful memories as possible. Middle School is simply a necessary developmental evil.
(Review by Cheryl Wurtz)