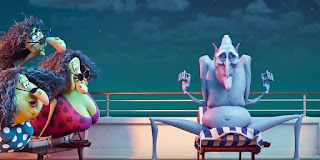 I have liked Adam Sandler for many years. One of my favorites was the 2002 release of the underrated Paul Thomas Anderson treasure that was “Punch-Drunk Love” that found his lonely and despondent Barry Egan character falling off the deep end with his troupe of sisters in his life.
With his new release of “Hotel Transylvania 3: Summer Vacation,” one of his last times to be seen on the big screen, since the variety of his flicks are going straight to Netflix nowadays.

The plot in “Hotel Transylvania 3: Summer Vacation” involves Dracula (the voice of Adam Sandler) receiving a “zing” when he looks upon the cruise director, Ericka (voice of Kathryn Hann). She is hiding something from Drac, but that aspect only adds to part of the plot twist in this very enjoyable tale.

Whereas the second chapter involved kids and shenanigans at a summer camp, this one is about a giant nighttime cruise that will be covering aspects of The Bermuda Triangle. The cruise is going there with some nefarious ideas on how to take out some of the monsters and eliminate them from the world altogether.

He was also Emmy nominated for his work on “Samurai Jack,” “The Powerpuff Girls” and “Dexter’s Laboratory.” This is just a fun flick, with the animators at Sony avoid the inappropriate innuendoes that were prevalent in the mediocre sequel that was “Despicable Me 3” a couple of years back.

Some funny tidbits are involved when Asher tries to sneak their rather big dog Tinkles (Bob) on board the ship.

Another funny joke occurs when Steve Buscemi’s Wayne wolf drops off part of his brood of more than a dozen of his kin.

What was surprising was to see how the filmmakers prevented Dracula from going out during the day. He only when out at night.

Also amusing to the proceedings is Dracula states he does not say “bleh bleh” at all.

“Hotel Transylvania 3: Summer Vacation” does what it’s supposed to do and just entertain the little tikes for a brief spell during the day.