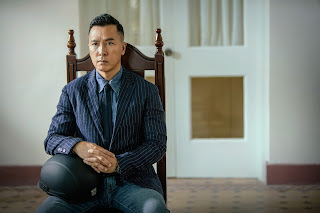 Hardcore fans of Donny Yen action movies may be a little confused with his new movie in which he plays an unconventional high school teacher. It's a bit formulaic story wise, but it's fun to watch while also addressing some serious social issues facing Hong Kong's educational system.
This is a passion project for co-producer Yen, directed by Ka-Wai Kam and written by Tai-lee Chan that pulls on the heart strings as it aims for inspiration.

Yen plays Chen Xia who is returning to his old school, a Hong Kong Band Three secondary school which is threatened with closure due to the low performance of it's student test scores. Despite his inexperience in teaching, he is given a liberal studies classroom where the unruly teens are cooking, listening to music, playing video games and sleeping. Anyone else would have been yelling for their attention, but Chen attends each of the students offering some common sense advise with knowledge is power information on the hazards of smoking. The students don't know what to think of him.

The story follows a group of misfits, twin brothers Bruce (Tong Kwan-chi) and Chris (Tong Kwan-yiu) with an alcoholic father; car fanatic tomboy Gladys (Li Ching-kwan) who feels unloved by her dad because she's not a boy; a poor boy Jack (Jack Lok) who lives with his grandmother and gets mixed up with gangsters; and an aspiring Pakistani singer Gordon (Lau Chiu-kin) whose dreams are stymied by social prejudice. They get expelled from school for a fight, but Chen manages to get them another chance. Jack alone does not come back, but instead gets involved with gangsters at the MMA gym run by Kane (Yu Kang). Chen manages to find solutions to everyone's problems including fighting his way out of the boxing gym to extract Jack from the gangster's clutches. When word of his fighting skills is reported on TV, suddenly everyone at school is seeing Chen in a different light. He becomes an object of hero worship including from fellow teacher Ms. Laing (Joe Chen) who is totally smitten.

The students discover that their teacher not only is an alumnus of their school, but was a U.S. Marine. There is plenty of Donny Yen fighting skills on display especially with Yu Kang who is an fight choreographer. For a school drama, it really doesn't show much of Chen's teaching methods. The students become more attentive and respectful after they discover that Chen is an unbeatable martial artist. The path from feeling like losers to suddenly wanting to ace their exams and think there may be life after they graduate is pretty quick. Despite how everything is conveniently resolved, it's still an enjoyable light tale. The stress faced by students while dealing with their family and financial problems that sometimes lead to suicide are addressed. It's too bad we can't all have Donny Yen as our teacher.
(Review by reesa)