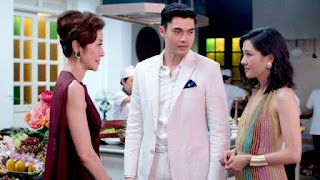 “Crazy Rich Asians” brought the increasable joy!
Based on the novel of the same name by author Kevin Kwan, “Crazy Rich Asians” may not topped over the same style as Marvel Cinematic Universe, but it is widely considered to be an exciting flick to see as a movie goer. Not only it’s film for American viewers, but it’s also for Asian people in general. It is the first Hollywood film to feature Asian Americans in leading roles since 1993’s “The Joy of Luck Club.”

This film centers the young woman named Rachel Chu (portrayed by Constance Wu) who is meeting her boyfriend (portrayed by Henry Golding) and his parents in Singapore. But when she finds out about their lives as the richest family in Singapore, she discovers her boyfriend’s family with the dark past and purpose to be revealed.

Actors Henry Golding (BBC's “The Travel Show”) and Constance Wu (“Fresh off the Boat”) are a loving couple and finding their place to satisfy themselves. Through the movie, they soon learned what’s more than just being rich: it’s about love and money never solves problems. Money is the enemy of love as it produces power and self-ambition, but with a dark purpose.

What’s more surprising is actress Michelle Yeoh stole the spotlight as a key witness and low-key villain to Wu’s character, similar to the performances of Michael Keaton from “Spider-Man: Homecoming” and Alec Baldwin from “The Cooler.”

The plot entirely seems like it is a mystery film when it comes to being rich or having lots of values based on family cultures. Even in the humble beginning of the film, the setting is alike from several casino films. The stereotypes are brought up surprisingly towards Asian men and women. Men are charming and attractive while women are open-minded and independent. Not only that, but also the plot and the main characters are as just as juicer as Pixar’s “A Bug’s Life.”

The direction and the scripting are good but not as perfect as Marvel’s “Black Panther.” Jon M. Chu’s direction is somewhat cliché while the script-writing isn’t well done at all like a flat iron steak being cooked properly. However, the film gets a gold star on two things: music and the supporting cast. The music is very artful and crafty compared to Pixar’s “Incredibles 2.” Supporting actors Gemma Chan (2019 “Captain Marvel”), Lisa Lu, Nico Santos, Ken Jeong, Ronny Chieng and Jimmy O. Yang also done a terrific job on their roles. My favorite apart about this film is the scenes involving Jimmy O Yang and Constance Wu as they both provide comedy in the background.

In conclusion, “Crazy Rich Asians” is a good movie. This film is filled with awesome adventures and sneaky surprises. I did not particularly dislike this film, but it’s a recommendation for Asian Americans as well as people hailing from Asia. I found my eyes and senses quite shivering with suspense. But if you interested in this flick, be my guest. This is typically the most diverse film I ever watched, not counting Disney films.