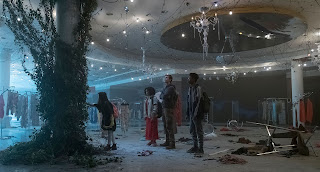 Yes, it's another young adult fiction series turned into a movie when plucky teens fight against the world trying to put them down. It's not as visually violent as it's predecessors like The Maze, Divergent, or the Hunger Games. The concept is more interesting and the lead heroine is a young woman of color. The screenplay was written by Chad Hodge based on the 2012 book by Alexandra Bradken. There are six books in this series, so there is no doubt there will be more movies to come. Director of Jennifer Yuh Nelson, who did Kung Fu Panda 2 and 3 is at the helm giving the story over to the emotional development of the characters drawing the audience in and keeping them engaged.

The country has been affected by a pandemic called IAAN that kills most of the children under 20 years old. The remaining children start displaying "powers" of various degrees. They are all gathered up and put in special camps where they are tested, then categorized by a color that labels their capabilities. Greens are harmless, and they are the smart ones. There are blues and yellows above them. The reds and oranges are terminated immediately as they are the most dangerous. Young Ruby(Amandla Stenbergis) an orange, but she uses her powers to get the doctor to say she's a green. She spends the next 6 years hiding her condition until the government figures out how to use a sonic sound that affects the ones with the strongest powers. Ruby is helped to escape by Dr. Cate Conner (Mandy Moore) who works with a group called the League that wants to expose the horrific treatment of the children. At this point, Ruby is not trusting anyone. She escapes from their custody and encounters Liam (Harris Dickenson), Chubbs (Skylan Brooks) and Zu (Myla Cech) who reluctantly take her with them. They are also being chased by bounty hunter Lady Jane (Gwendoline Christie). The kids are in search of camp set up for super powered kids that have escaped the government.

The world is basically childless, with most adults moving to the cities for work. The countryside is empty of life except for a few farms. Malls and service stations have long been abandoned. The surviving children have been living in the government camps for years have have been psychologically affected (interesting comment on what is happening to migrant families). Those that escape are forever damaged and afraid to return to their families. The slip camp is run by Clancy Gray (Patrick Gibson) the president's son who was supposedly cured. Of course that's a ploy by the government to bring hope to families. There are some plot points that are fairly obvious and the story is opened ended so that you want to read other other books to find out what happens next before the next movie comes out. Overall, it's interesting though somewhat formula. It's just nice to see characters not walking around doing dumb stuff with performances that make you care about them. Worth the popcorn.
(Review by reesa)

Email ThisBlogThis!Share to TwitterShare to FacebookShare to Pinterest
Labels: The Darkest Minds review