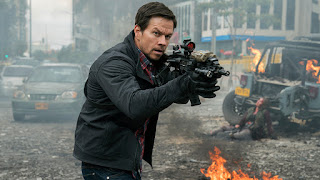 In their fourth collaboration, actor/producer Mark Wahlberg and director Peter Berg, team up again to bring to the screen what they hope will be a franchise of hard action films. However, this first of the series doesn't bring much hope of this happening. The fighting scenes are pretty intense, the acting minimal from most of the players, the editing and pacing is jumbled, and Wahlberg's manic dialogue is distracting. Only
Iko Uwais as Li Noor keeps one glued to the screen.

The screenplay by Lea Carpenter, from a story by Carpenter and Graham Roland is a bit confusing, so to simply it, it's about a CIA special forces team called the Ground Branch who work off the grid guided by their operations leader called Mother (John Malkovich). Like a Mission Impossible team where the government can't officially acknowledge any of their activities, the Ground Branch wipes clean any nefarious plots. In this case, they must get an informant out of the country by moving him 22 miles from the United States Embassy to and awaiting plane within a window of time while terrorists thwart their movements. Li Noor (Iko Uwais) who claims to know the locations of stolen deadly explosives bargains his information for transport out of the country. He also attached some sort of electronic booby trap to their computers and he won't give the code til he's at the plane. So there is that.

The beginning of the movie shows how ruthless the team can be when they unearth a Russian operation in the middle of a suburb and they are forced to eliminate the occupants, including a 18 yaar old young man. Now they are in Southeast Asian looking for these contraband explosives. The exposition of the story is narrated by Silva (Mark Wahlberg) who is being debriefed after the the extraction. His character is rude, abrasive, everyone has nothing good to say about him, but he's supposed to be brilliant. He motor mouths his superiors and they put up with it because he can get the job done. Lauren Cohan plays Alice one of his team members who is fighting with her ex to see her daughter. Rhonda Rousey is Sam another kick-@ss member of the team. At least they don't have the women wearing tight outfits and high heels. They wear boots and are as competent and fearless as their male counterparts. The body counts are high and bloody making up much of the film with tense chase scenes. Iko Uwais who starred in The Raid is pretty amazing. If nothing else, he's worth going just to see him. If this is going to be a trilogy, hopefully it will include him.
(Review by reesa)