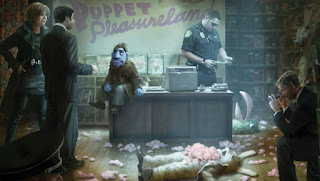 To be quite honest, this movie was a lot tamer than I expected. I expected lots of outrageous gags, toilet humor and reprehensible antics to occur. They did, but in a far less reaching tableau of time.

The puppets and man co-exist in this world, something that is just looked at as commonplace in their society.

“The Happytime Murders” takes full advantage of the “R” rating, since bits of dialogue are a tad extreme in their delivery.

For comparisons sake, I choose “South Park” creators’ Trey Parker and Matt Stone’s puppet-laden 2004 release of “Team America: World Police” as a noteworthy companion piece to “The Happytime Murders.” That one carried an “R” rating as well.

The antics that occur are outrageous in spots, but the majority of the humor misses the mark. Lead actress Melissa McCarthy brings back friend and co-star Maya Rudolph (“Bridesmaids”) as a human known as Bubbles, who handles the day-to-day happenings of Phil Phillips, who is McCarthy’s ex-partner on the Los Angeles police force. Other humans in this tale include Elizabeth Banks (“The 40 Year Old Virgin,” “Zack and Miri Make a Porno”), Joel McHale (TV’s “Community”) and Leslie David Baker. Some people might remember Baker from TV’s “The Office” wherein he always shrugged at the ridiculous notions that came out of the idiot Michael Scott played by Oscar-nominee Steve Carell.

The directing chores were handled by Brian Henson, who did a great job with 1992’s “The Muppet Christmas Carol,” one of the few musicals I can actually tolerate. So the reader knows, I am not a fan of musicals at all. I can tolerate them to a certain point, but am not a fan of the genre as a whole.

He also handled the directing chores on “Muppet Treasure Island,” (1996). As of this moment in time he’s executive producing “The Power of the Dark Crystal,” a follow-up to 1982’s “The Dark Crystal,” which was directed by his dad, the late Jim Henson and Frank Oz. It was a strange concoction, since no human beings are in the movie, rather just puppets and fantasy elements galore. Brian Henson is also on board for executive producing an update of “Labyrinth,” a 1986 family fantasy which was also directed by his late father.

Some of the one-liners work, such as when Phil Phillips comments on McHale’s FBI’s agent status and sarcastically calls it an fn’ big idiot. The chemistry between Randolph’s Bubbles and cop Phil Phillips works. McHale’s part is that of FBI agent Campbell, who thinks mighty high of himself and his role in the City of Angels police department.

“The Happytime Murders” might find an audience here with the cinema selection appearing kind of lackluster, but there are worst choices out there.

The chemistry between McCarthy and the other characters work since the interaction between the humans and the puppets is taken as an everyday occurrence. There is a backstory involved, but that angle is only used to cover a portion of this tale. I wouldn’t call this movie a major dud, because some bright spots tickled my funny bone.

Posted by Dallas Movie Screenings at 7:33 AM