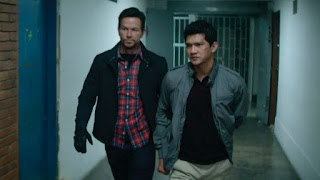 Peter Berg has amassed quite the career. First, with his acting gigs, which encompassed quite the resume with roles in “Very Bad Things,” (Which he also directed) “A Midnight Clear,” TV’s “Chicago Hope,” “Fire in the Sky,” James Mangold’s “Cop Land,” and Michael Mann’s Tom Cruise-led “Collateral.” He also helmed one of the dumbest yet fun guilty pleasures with the based-on-a board game “Battleship.”

But, we’re here to talk about his new action-drama “Mile 22,” which finds him re-teaming with Mark Wahlberg, (for the fourth time), a star he worked with most recently in “Lone Survivor,” a 2013 tale about the last man standing in an operation overseas. More recent pairings were with the true-life tale oil spill flick “Deepwater Horizon” and “Patriots Day,” about the Boston bombing which occurred in 2013.

Berg knows his prowess and it shows in his handling of the scenes where Li Nor takes on some nurses at the local hospital. It is significant because that is not where they have to take Jaa’s Li Nor, a prisoner and former cop they want for safe keeping. He also has some intel on an ongoing situation they want the keys for.

Berg knows how to handle the camera in these sequences, because it is a tight fit where all the action takes place. Just like his fine work in 2003’s “The Rundown,” where The Rock actually did a great job in the role and did not make his part a caricature, since his bounty hunter persona wanted to open a restaurant and get out of the bounty hunting life he was accustomed to. Berg knows when and where to just point and shoot.
“Mile 22” is gritty as all get out, since the movie does not follow normal traditions and parameters in storytelling technique. It is non-stop from the opening scene. The pacing is brisk, fast and only sets itself up for brief spells to just do some minor character development.

What was also of interest was the close knit operations that endured. Everyone involved does not carry any identification. The team, for all intents and purposes is a bunch of ghosts.

Not to ruin anything, but this one falls into “The Usual Suspects” and “The Game” pretzel-twisting thriller camp.

As aforementioned, the pacing on this well told tale is simply relentless. Berg always keeps viewers eyes transfixed on the screen.