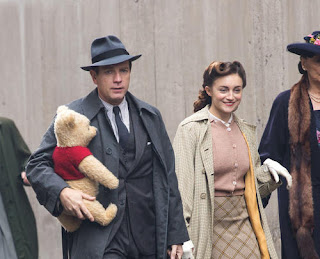 This gem was a fun flick in the typical Disney vein.

Director Marc Foster, who dabbled in family friendly fare with 2004’s J.M. Barie “Peter Pan” tale “Finding Neverland” with Johnny Depp, Freddie Highmore and Kate Winslet eases the audience in to what happens when “Christopher Robin” (Ewan McGregor) grows up and has to deal with some corrupt British nayer-do-wells at his current job as of late. His job title, easily put is that of an “Efficiency Expert.” His Robin character is forced to “trim the fat” at his current job by laying off 20 percent of his work force.

This movie was cool, since it even brings back the voice talents from the ensemble. This includes Jim Cummings as both Winnie the Pooh and Tigger, as well as Brad Garrett as Eyore (the original actor who provided the voice of Eyore, Bud Luckey passed away Feb. 18, 2016) , Nick Mohammed as Piglet, Peter Capaldi as rabbit, Sophie Okoendo as Kanga and Toby Joes as Owl.

As his wife, Hayley Atwell brings forth a certain charm and spunk as his wife, Evelyn Robbin. If she looks familiar, that because she’s part of the Marvel Universe with her recurring role as Agent Carter, who made her first appearance in “Captain America: The First Avenger. (2011).”
Also important is Brooke Carmichael as daughter Madeline Robin, who quickly takes to Winnie the Pooh’s troupe. She is one of the few actresses I have seen in recent memory who can actually work well with the inanimate objects that are supposed to be her friends.

This drama-fantasy actually works because it deals with plights and predicaments that occur when one gets old. At one point, Pooh even says “You still look the same, but with more creases.”

The animatronics work here completely captivates from the opening scene when all the characters are spending time at a picnic. They are gathered to say goodbye to Christopher Robin.

The antics that occur here improve vastly over the stand-alone “Winnie the Pooh” tale that landed with a thud in the summer of 2011. That particular tale had no spunk or verve, and I think I gave it an unimpressive C when I originally viewed it.

A family tale worth the full price of admission, Disney’s “Christopher Robbin” captivates from beginning until end.

Posted by Dallas Movie Screenings at 12:37 AM