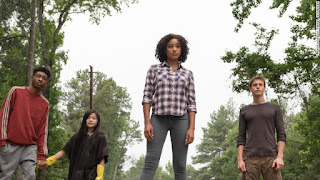 Where to even begin with this movie? This is part one of a supposed series that might not even get off the ground if the movie-going public never gets to see it. This is part of the craze that wants people clamoring for something unique and original, but within certain set parameters of originality.

Take, for instance the new show on the Fox network “The Gifted,” which deals with mutants and their otherworldly abilities. It is a very interesting and feels like a pretzel-twisting show that has viewers returning to see what happens the next week.

The cast of “The Darkest Minds” contains some familiar faces. Amandla Stenberg of “Everything Everything” and “The Hunger Games” is Ruby, a character sent to the orange faction who has some amazing supernatural abilities, including the erasing of memories and the ability of persuasion. Also present is Mandy Moore’s Cate persona, who is a doctor at the place where Ruby was a prisoner who was forced to work a thankless job required for her sheer survival.

Moore is probably best known for her role in 2002’s “A Walk to Remember”, written by Nicholas Sparks, and “Tangled,” the animated Disney tale about Rapunzel and her magical hair.

One scene finds Ruby returning home but she only peers through the window. She never ever sets a foot in the house, but just walks away without any answers.

She becomes friends with her peers. Of course, there is a love interest in Harris dickinson’s Liam, an older gentleman who shares a certain kinship with Rudy. It is nice to see is her relationship with a Chinese girl named Zu (Mya Cech) and a fellow friend in Chubs (Skylan Brooks).
The director for this live action dystopian tale is Jennifer Yuh Nelson. She has been in the business for upwards of twenty-plus years. She even received an Oscar nomination for directing “Kung-Fu Panda 2,” as well as prime time Emmys for directing 1999’s animated “Spawn” TV series.
The trouble is that within this movie all adults are seen as some sort of liability or evil entity.

The pacing in “The Darkest Minds” is neither brisk nor fast, but just kind of putters along until it ends in pure mediocrity. The big reveal in the end feels like a cheat to the audience.

I’m sorry, but why do all dystopian tales end in such disdain and misery?

I wanted so much more out of this movie, but like the disappointment that was Chris Weitz’s 2007 “The Golden Compass,” I just left feeling very unfulfilled.