A Dog's Way Home and Interview with W. Bruce Cameron and Cathryn Michon

Best selling author W. Bruce Cameron has written multiple books on dogs like A Dog's Purpose and the upcoming A Dog's Journey, wrote the screenplay with Cathryn Michon in this touching family film directed by Charles Martin Smith. If you spend your time watching animal videos on social media, this is the long version of a sweet young dog who gets separated from his human and embarks on a 400 mile trek to go home. Bring tissues.

Bryce Dallas Howard is the voice of Bella, a pit bull mix pup who is born under a collapsed building that is occupied with feral cats. When the animal control workers come, they managed to extract the mother dog and some of her babies, while Bella is rescued by one of the mother cats who lets him nurse with her babies. One day Lucas (Jonah Hauer-King) and Olivia (Alexandra Shipp) come by to feed the feral kitties, they discover Bella who they can't resist taking her home. Bella adores her human and his Army veteran mom, Terri (Ashley Judd) who suffers from depression. But they worry the landlord will discover him. Plus there's a pit bull ban in the city of Denver with will destroy any pits they capture. Lucas brings the dog to the VA hospital where he works and Bella quickly becomes a comfort animal for veterans. The crisis comes when the vindictive, corrupt dogcatcher in league with the slimy developer who wants to kill a colony of feral cats living across the street target the dog as a banned breed. Olivia's relatives are willing to take they dog while they find another place to live out of the city. Unfortunately, it's in Farmington, NM.

It is there that Bella, missing her human, becomes fixated on Lucas's last command to "go home" that caused her to be picked up and ended up in the pound. And now she doesn't know where she is. Even though her new caretakers are nice and giver her food, she still wants to complete going home. She jumps the fence and starts a journey that takes her over 2 1/2 years to accomplish. The scenery is outstanding.

Her various adventures involve befriending an orphan baby mountain lion. Since Bella was raised with cats, their friendship is understandable. They help each other forage for food and keep each other warm. It's also a good association when the wolves come calling. Bella learns to find food from wandering dog packs who show him how to find treasure in trash cans and handouts from the back door of restaurants. Bella helps a hiker in an avalanche and gets a home with a gay couple who gives her a collar and love. The most jarring segment is when Bella falls in with a homeless veteran (Edward James Olmos) who uses him to get more handouts. Then later chains him to himself before he dies in the woods leaving Bella to weaken from hunger and thirst before some kids free him. This may be a little too much for younger viewers, but it's quickly followed up Bella finding her way home.

Bella who is played by rescue dog Shelby is as cute and lovable as a dog can be. It's unfortunate that the CGI segments of the film involving the wolves and the cougar are so distracting. The play with the cat and dog on the ice is like a Disney film and it's hard to accept the live dog and fake cat. As a movie for kids, they probably won't notice. It's also a plus to see Wes Studi as a police captain at the end to make sure all is well. This is a nice family film for dog lovers everywhere.
(Review by reesa) 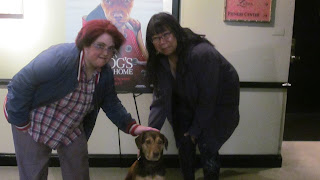 Author W. Bruce Cameron & Cathryn Michon screenwriters for A Dog's Way Home at a round table talk about the movie.